This was a treat. In the same week two related great textile events. The University of the Creative Arts, hosted through the Crafts Study Centre in Farnham, organised a symposium on damage and repair, entitled 'What do I do to make it OK?'. This was a symposium that followed an exhibition of the same name with a number of exhibitors who also spoke on the day. And then at the weekend Dorothy Caldwell taught a class at the Royal School of Needlework, I guess as she was already over here to show some of her work at the exhibition and to attend the symposium.

Symposium: What do I do to make it OK?

This event consisted of a number of quite different talks by different types of presenters: academics, artists, makers, researchers and community artists. The idea of damage and repair was interpreted quite widely from broken communities, repairing the soul, to more literal meaning of repair through mending.

The first keynote speaker was Bouke de Vries. A high end artist with an interesting background in fashion and ceramics conservation and now working in sculpture. He showed a lot of his work in a chronology of his development as a maker, including works based on the Dutch still life genre and some quite humourous pieces, including a Marge Simpson as a Madonna with a number smaller Simpsons at her side. This was one of the better talks and others that stood out for me were: a talk by a community artist (Claire wellesley-Smith, author of 'Slow Stitch'), whose challenge in a deprived area of Bradford was tangible, a talk by Celia Pym on repairing stuff in a dissecting room, a presentation by Fredie Robins on her knitted work, which included some repaired by Celia Pym, and a great talk at a time when energy levels were short, on women's memories of repairing, mending and the tools of sewing, including button boxes and darning mushrooms.

I was really happy to have attended this event. It is rare to get a whole day of such good speakers. I would have preferred that they had had fewer speakers and given people longer time to speak. There were some talks that were poorly targeted at the audience, and others that needed to have practiced beforehand, and at 20 minutes for each some of the talks whizzed through. There was a lot to think about and wonder at, and you sometimes questioned what might come next for some of these artists.

The exhibition was also quite stimulating. There were examples of Pym's work with repaired socks hanging on the wall, some of Caldwell's smaller pieces and other works using, for example found objects and juxtaposing them with natural materials such as shiny silvery packaging for tights from which dried grasses were suspended, drawings and other works.

The Canadian artist, Dorothy Caldwell, is a well-known name in the world of quilting. I saw her work a few years ago at the Festival of Quilts. Her background is originally in fine art, in painting and print making, and she works with her textiles in a painterly way, thinking carefully about materials, how fabrics are composed and asembled and moving beyond the quilt, to works on paper. She is interested in textiles from daily life, the simple stitching made by ordinary women as they create the materials stuff of everyday life. The course was based on her considerations of kantha quilting and she gave us a talk of a study visit she had made to India looking at the application of this technique, as well as showing her own work. 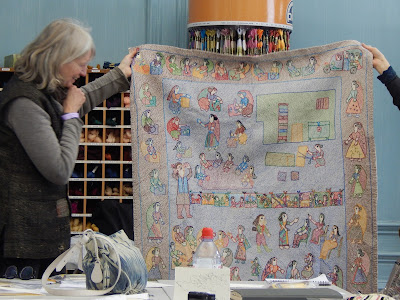 Here Dorothy is showing a kantha quilt she has brought back from India. She was considering the iconography of the work, how stitching was used and the way the women's co-operative used the kantha tradition to tell meaningful stories for the women in the present. 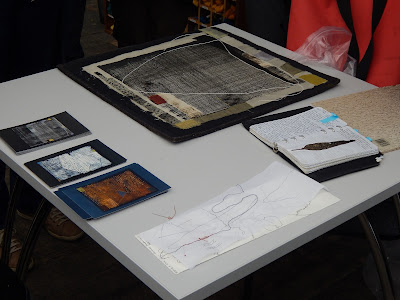 She laid out some of her work and sketchbooks for us to look at, and to learn from her processes. This was quite interesting, to touch someone else's process and see how she experiments with materials and tools.

The course consisted in a few short drawing exercises, including drawing marks based on sounds gathered in the grounds of Hampton Court and drawing lines and impressions from walking and observation. 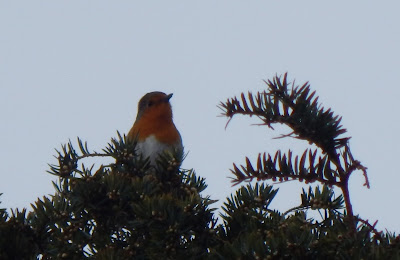 I picked up all manner of sounds including planes overhead, birdsong, people talking, swans and crows squawking and crunching pebbles underfoot. There was a very keen robin sitting on top of the topiary and I managed to zoom in on him after my drawing exercise. 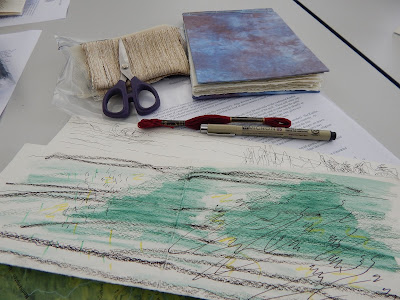 We were provided with a pack of materials and thread and given some drawing paper to use. Above you can see some of the sound-marks I recorded using pen and charcoal. 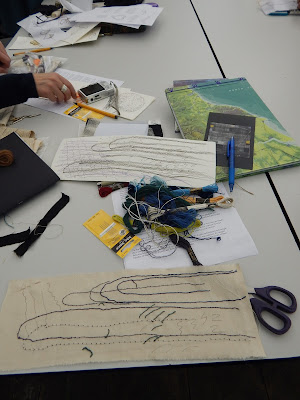 Here you see the work in progress, a sample with couched thread, the drawing and some of the threads I used.

Overall this was a very useful course to inspire further work. Dorothy suggested we were doing a five day course in a single day, and I am guessing that if spread out, having more time to think and to prepare various stages we might have had time to finish things and to experiment further. As it is the course was a useful trigger for thinking about next steps.

Dorothy Caldwell's work considers the landscape and the materials in it. I find it interesting  that the combination of the thought pattern concerned with ethnic traditions in making with a concern with the stuff of the landscape (marks, colours, earth) creates her unique artistic language.

I think it it worth remembering that we can use references in all manner if different ways, not just a literal reinterpretation, but let the idea of some of the sources be channelled through experimental work, drawing and working out of ideas that concern us. I would like to think about that a bit more. When I see certain textile artists with good ideas, that are then repeated over several years in almost the same way I wonder about renewal of work, how one develops and grows and shifts. To bring this thought back to Bouke de Vries' talk: what he showed was that there is always something new to explore, interesting sources to work out, and that even one's training need not be limited but can be built on and re-generated.