I spent a long weekend at West Dean on a course run by Cas Holmes on creative journals. Cas is known for her textile-paper works using nature as themes for her foldable work. She uses observational drawing as a starting point, and that was one of the approaches she walked us through. I will not show every single thing we did on this course, there was just so much to do and we all worked very hard.

As preparation I had brought photographs of hazy, foggy landscapes, but in the end I went with the flow of the course and made other things. I did plan to make something that would be more or less complete and am happy to say, the 'book' I made has come out well considering the time constraints and the ambition of the work (I overstretched myself rather, and worked very hard on the last day to try to get everythign done before going home).

The first day and half concentrated on creating materials, preparing papers, manipulating sketchbooks and drawing. We scrunched paper, dabbed and jabbed paint onto sheets of paper and gathered things together for the following two days of assembling and forming art work.

Here's an example of some of this work:

This is using re-cycled photocopies of previous OCA work, and some relief work on scrunched paper. I liked the piece on the left which suggested bark-like textures.

Another set of pages: The blue section on the left is some nuno felt I attached to the page using running stitch and to the right a collage using a print of a close-up image of some bubble wrap with droplets and bubbles of condensation. I was trying to make the two pages echo each other by using the running stitch to suggest spiky ice bergs or cold icy landscapes.


Here's some work in progress. After creating all these pages of coloured and collaged papers we started to sew bit together. We had done some drawing and some people used these to start off their work. I had brought some photographs of hydrangeas, a photograph of a drawing I made during the last FDAD course (Foundation course at West Dean) I did and other more abstrated images, which I mounted onto a japanese postal bag that had been chopped into section: 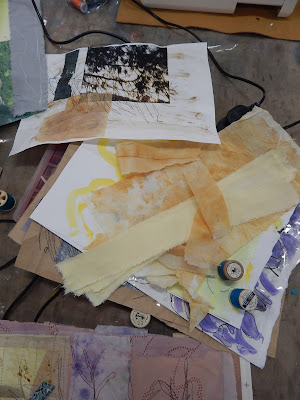 I used vintage threads, some of which were very fragile and would not sew properly - they broke easily, new threads, papers, including a faded paper bag, cellofane packaging plastic, tea bags and tissue dyed with tea. 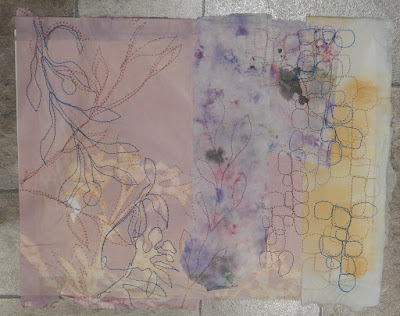 Here (above) is a piece using the faded pinkish paper bag and a some tissue used to wipe up left-over paints. This was just a practice-piece and I used machine stitch in shapes that I would probably have used in quilt-making (I am not a quilter though). This course was the first time I properly used paper as a background for sewing and collage. 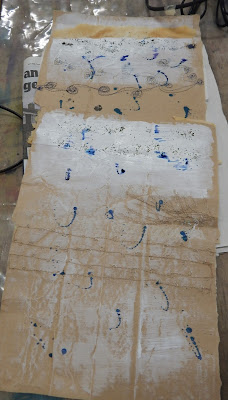 On the reverse of the larger book sections I left the back of the stitching uncovered, painted gesso over some of it and splattered ink on some section. Every paper section was then sewn together using a narrow strip of linen. This was helpful as it enable a sort of hinge between the pages to enable the book to be folded together, I then painted some of it with gesso and tried to make all the sections meld into a whole by using the rhythm and repetition of colour, materials and surface finishes. I was quite happy with the use of gesso, the thinner spreads enhanced the relief of the paper which I think can be seen in the above. 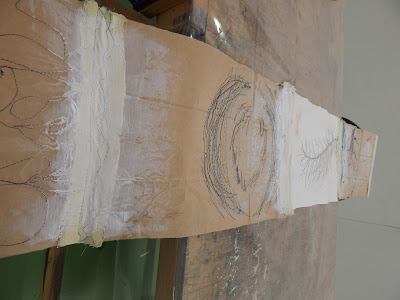 This is the back of the book and a few examples of the better sections from the back. The one below is the pattern created by stitching around the photograph of the walnut that was attached to the other side. 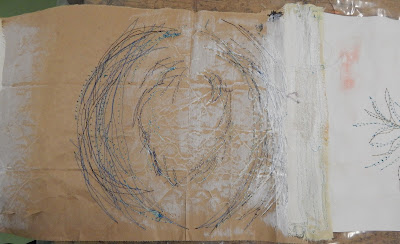 Another example of a section from the back: 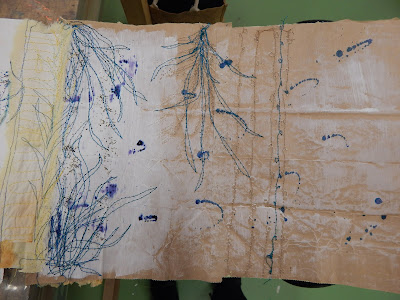 And an end section using white heavy-weight paper onto which I attached a tracing from a hydrangea picture, a bit of commercial lacy machine embroidered cotton, tea bags and japanese paper painted with gesso and frayed. All sewn over in  a flowery design in pale violet. 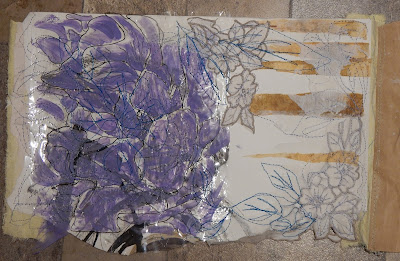 Here's the final think suspended for display for the final crit/show and tell: 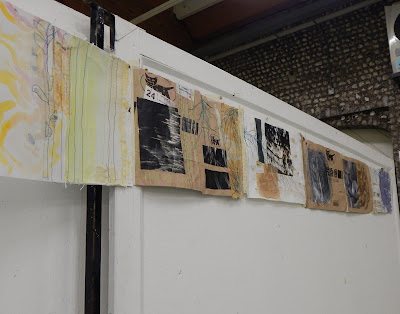 I was quite interested in this way of working, of not being confined to a book necessarily, but using loose sheets of paper as a foundation. The idea of working fairly big in different media and using different techniques on individual sheets which can be assembled later may be useful in creating workbooks when planning tapestry and felt projects. You can't be fiddly with felt samples, and tapestry may also lend itself to be put together with other things to think about how it could be developed differently from conventional ways of thinking about this old technique.

So far I have learnt a lot from these courses at West Dean. It is very useful to be able to fully immerse oneself in the work, just eat, breathe and talk art, and get handy tips and constructive contact wih practicing artists. It means that I can leave with lots of ideas and skills that I can take with me into my own work for further digestion and synthesis into something that will be part of my own language. This sketchbook course was in particular improtant for letting me work on a 'book' that would be complete piece that I 'own'. I have really only developed sketchbooks as part of submissions to external bodies and I wanted  to work out how to keep a sketchbook that is for me alone, not for communicating with other people. I think I will work on this a bit more and work on book alongside projects or in preparation for projects to be made some time in the future. Just an ongoing ticking-over sort of activity to help build visual confidence.

Posted by LGoldsmithtextileart at 12:07 2 comments:

Another tapestry on the way

I am planning another small tapestry. This is going to be mostly black, but to create the 'life' of the piece I will be using a soft pastel bluey-green.

Here are some of the yarns I will be using (not the green on the right, that is for a the tree project): 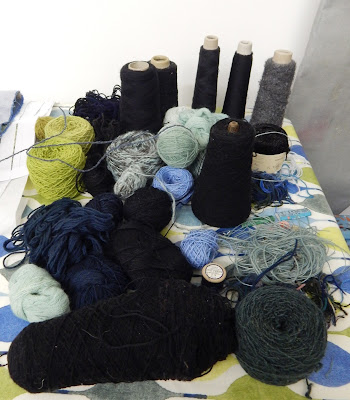 And here's a sample in progress:

Not a terribly good picture, it lacks definition, but you can see I am working on blends and textures here. While I am working to finish the tree project this tapestry wil be on hold for a little while.

Posted by LGoldsmithtextileart at 12:02 No comments:

I had a bit of a dyeing day today. It was a nice day, and I had intended to go to the studio, but then I started one dye bath, and then another, and before you know it, there were three dye-baths going on.

First there were a couple of yellow acid dye baths. I put a variety of yarns in there, some blue to get green, some rosy pink to get orange, some beige and some natural wools.

Here is the range, various oranges, lemon and other yellows and the greens. The picture doesn't do the colours justice, they are in fact a lot stronger than is shown here.

Another dye bath was a violet cold water dye. This is obviously for cellulose fibre, so I dyed some linen and cottons. 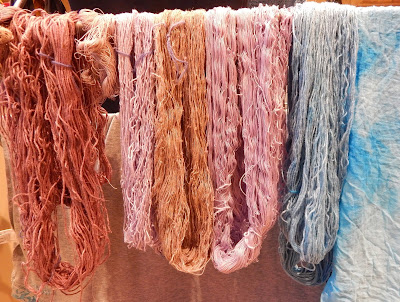 This photograph does not show the colours properly. But basically there are various shades of violet, and some very pale yarns. I also included some natural coloured flax which didn't pick up the dye very well.

A finally I used a vintage Dylon universal dye to dye both cellulose and protein fibres, a bright turquoise. 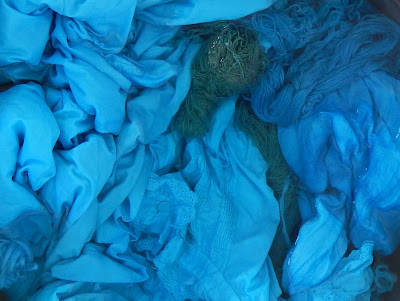 Overall a productive day. My head was buzzing with plans for project including using some yarns in felt making, using discharge dyeing and embroidery on this old nightie I dyed turquoise and so on - lots of ideas just bursting to get out into the fibre.
Posted by LGoldsmithtextileart at 11:55 1 comment:

A craft programme on TV

As last year the Danish TV channel, Danmarks Radio, is showing a programme on craft. It is set up as a competition, a bit like the craft progamme headed by Monty Don, but in this Danish series a group of crafts people, who each have a specific specialist discipline, take it in turns to host the group at their workshop or studio, and the group then has to work on a material and use tools they will not have tried before.

The first episode showed the group in a workshop manufacturing horn products. The crafts or materials represented in the group are wood, concrete, clay, silk, brass and prescious metals. The horn-maker, as host in the first episode, ran through the basic skills and techniques to manipulate and work the material, after which the group then had to first make a set project (a spoon) and then after this were to design an object each for assessment by an expert judge. The exercises are timed.

I really enjoy this programme series. We get a good idea of the design thinking behind each object, and there is a clear challenge for each maker in working a material they do not necessarily know; and in the case of the horn, certain characteristics presented their own problems which might not have been foreseen by the makers.

In short snippets there are quick chats with each maker. They talk about the design, their aim in their choice of expression in the material or the way they may have had prejudices about the material before they started working on it. There is a clear leaning towards function. All the makers are clearly masters of their own craft; they look as if they have been working on their respective fields for many years. Some of them try to apply what they have learnt from their own discipline to the new material, which may sometimes work, others try to work with the material without a similar background, and so I guess look at the wider design-craft universe for inspiration in their made object for the programme.

Although the programme does not show any one craft in depth, it still manages to convey the way a designer-maker thinks, their meetings with the material and the energy they apply to their work. The programme is edited in a way that suggests that they are mostly open and positive to the material, even if in one case the ceramicist had reservations about horn being somehow oldfashioned and gave him a sense of 'the 70s'.

The makers just have a go at the new craft presented in the weekly challenge, and they all seem to make beautiful objects. I am guessing that with a title such as 'Made in Denmark', there may be a brief on the design philosophy underpinning the programme. But it has the feel of giving the makers freedom to design in whatever language they prefer, and in the first programme they certainly looked as if they grasped the qualities of the material very quickly. I am looking forward to next week's instalment, it is definitely a one-to-watch, if you know the Danish language and have an interest in the culture of making by hand.
Posted by LGoldsmithtextileart at 13:04 No comments: