West Dean College offers a great range of course from calligraphy to drawing, to stone carving to textile courses. I am working towards their Foundation Diploma and as part of that I choose drawing and textiles courses.

Recently I attended an Experimental Textiles course with the tapestry weaver Philip Sanderson and the embroiderer-mixed media artist Michael Brennand-Wood. They have worked on a project together, a tapestry which they showed us, having asked each of the attendees to go through what we had done and what we might want to do during the weekend.

The course was set up to be pretty free. There were wooden frames in different sizes, rectangular or square, warp yarns, drills, nails, fabrics, ropes and other things that might inspire. I had not had time to think about designs, and am happy that I didn’t as it might have been inhibiting on the development of the work over the weekend. Instead I had brought a couple of Japanese obi, with tsuzure flowers and mushrooms. This was just meant to be the trigger ideas and my work that weekend went off at a tangent at one point.

It was a very busy weekend, and I didn’t finish the samples I started. I began by painting a large frame with India ink and attaching this large black grid created by a net. Within this grid I then tied a warp of thin linen in different colours, pinks and purples, but instead of just making a vertical warp I wove into it as well. This was to continue the idea of the grid from the black webbing, but it caused a fair bit of trouble when I came to weave, as I could only cover one or two warps at a time when I started weaving in the weft. It did mean that I could weave from all four angles, which was interesting and opened up a different way of thinking about the design. I could turn the frame and weave from any side, which is very different from weaving from bottom to top. 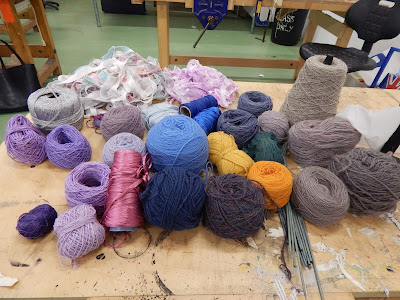 I had brought a bunch of wools, cottons and novelty yarns, commercial and hand-spun. I tore some fabric to create some fabric 'yarns'. 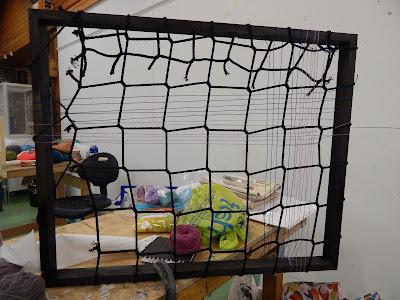 Here's the frame mounted in the workshop ready for weaving with the warps added, below is a close-up of the warps woven over the black net. Michael showed me how to do a type of chain stitch that I could tie across the black netting, that is the thicker blended yarn you see toward the lower half of the image. 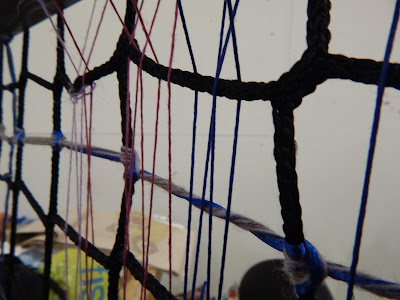 I started with weaving-in the flower inspired by the obi. The weft was made of blends of pink, with silvery colouring in the spaces between the petals. Hence I now have a section of woven flower and a larger section of loosely woven warps which I need to integrate in some way. Philip had suggested I look at developing some baroque or rococo style swirly sections that would evoke some swirls on the obi. And so to try out some of the techniques Michael showed us I had a go at wrapping aluminium rods with other blends which I bent to shape. 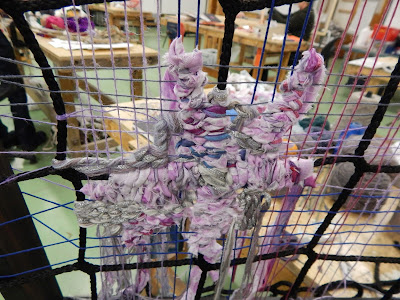 The woven flower in progress. It was looking good in a chunky experimental sort of way, it is clear how the wefts have been woven from all four sides. 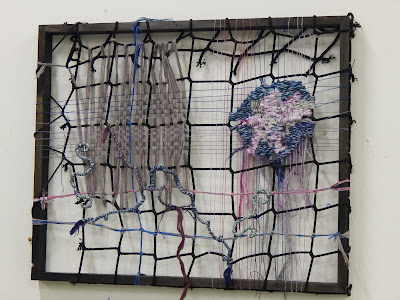 The sample in progress, I had loosely woven yarn on the left to prepare to add other elements. I also started to wrap strips which I will continue to make to make a denser area to the lower half of the piece. The 'S' shapes are the wrapped aluminium elements.

Half way through the course this sample I decided to make another sample made of bits being taught on the course, so I would have something to refer to. So, I started wrapping the frame, dyeing the warp with ink, weaving rolled newspaper, thick velvet ribbon on a small frame. Then I was going to place it somehow within a big frame, but I borrowed a book from the college library and got diverted by a fantastic technique I wanted to try out, so ended up warping up the large frame with two thicknesses of warp and started weaving textured structures and stayed within the grid of the weave. 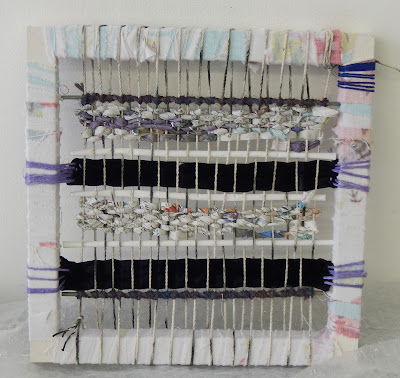 Small square frame with fabric wrapped around it, I tried out rolling newspaper and wove in paper sticks and broad velvet ribbon. 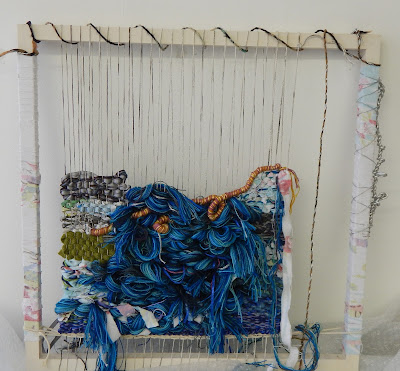 Trying out a chunky weft and pulling out the weft to make a loose wavy surface. I added a wrapped element to create a bit of interest in the blue and wove in a strip of felt, rolled newspaper, fabric yarn and more conventional wool weft. I tried out winding wire with fabric and winding aluminium rod, which became a quite organic shape I liked, I will use this again at some point in the future.


The main theme for me of the course was the experimental nature of the techniques, materials and tools. There was no real design approach being espoused, but a permissive environment of ‘try it and see’ which was valuable in allowing all manner of ideas and testing to be done by everyone, and the resultant works were therefore very different. I think mine looked a bit rough, but I think this is due to the nature of the materials and testing of techniques – and both samples are still unfinished. The work was process driven and it enabled a variety of responses and will be a useful point to work out next steps. Right now I am thinking about how I now will integrate the two sides of the large sample and have got some coloured wefts to finish the other sample. In the long run I think there will be space in this approach to permit myself to try out new things and not be too worried about getting a perfect think out of it from the start.