First I will add in a few pictures of plants that I took during my afternoon wanderings around the garden waiting to check in - a bit gratuitous, but I hope pleasing in their way: 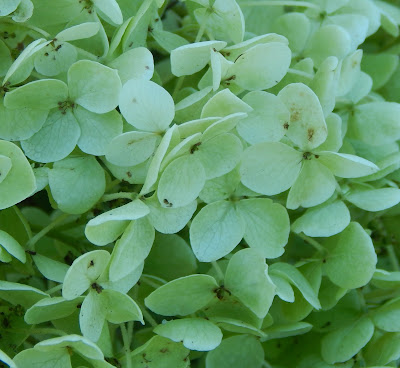 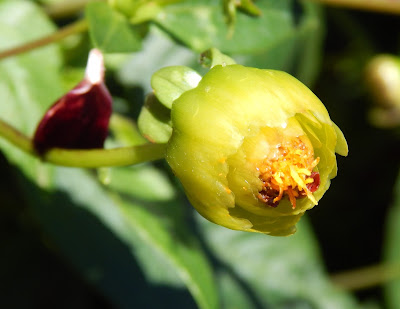 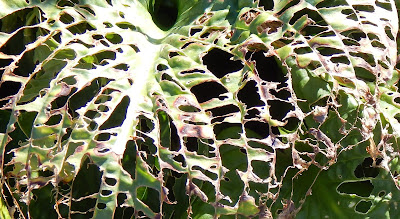 This is now the half way point of my FDAD course - the 6th course is the first step into the last half of the programme and I am now thinking about what the whole feels like.

For the 6th course I chose to do a knotted tapestry course with Anne Jackson. Anne is a  tapestry maker who uses a knotting technique rather than weaving, which allows her to create uneven outlines as she does not use a loom, but confines her grid to a series of warp threads onto which the knots sit. This creates a flexible way to build up the work and even allows for 3D shaping, which I had a go at towards the end of the course.

A knotted tapestry technique sits well with the experimental textiles that I use at the core of all my work, and as I am hoping that one day there will possibilities to work at a large scale, this is a way to think about scale and volume; even worked small this knotted technique is useful, as it can suggest shapes that are expandable and it could be useful in creating maquettes, I think.

So, the course really was a way to learn and practice the technique and we created some samples practicing starting by setting up the warp, knotting and knotting shapes, vertical lines and working with the warp in various ways. 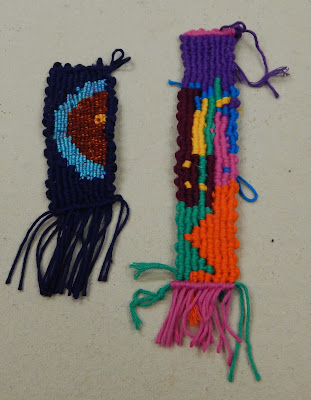 I had brought some drawings to work from and interestingly there were different schools of thought on how to use the original drawing as a guide for the work: someone suggested using the traditional way of developing a cartoon from the drawing using tracing paper and focussing on the key elements, having the drawing as a colour guide on the side; others favoured using the drawing directly under the work as guide for design as well as for colour choice.

I tried both: first using the drawing under the work, then later swapping the drawing for a tracing. As my drawing is quite complex I think in this particular case the tracing was probably the best way to work through the design, as I could examine the colour study more closely separately. It may be that when drawings are simpler and if colours were studied in more depth over longer time between the drawign and the yarns, then using the drawing directly in the knotting process could be a real option.

So, here is the very start of the 'weaving' when I was using the drawing as the guide under the work: 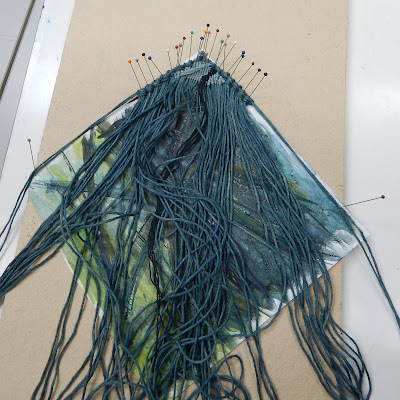 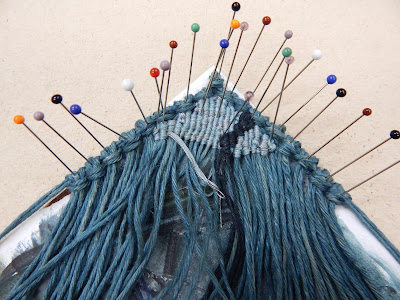 As you can see the technique requires you to use robust pins to hold the warp and certain knots in place, and the other thing that separates this technique from tapestry in the gobelin/Aubusson sense is the way the knots work - you have to simplify the design quite a lot, lines become quite chunky, and would probably work better in large scale works. Also, the work builds up from the top down, rather than being built up from the bottom up as in weaving.

I also worked on a small sample to develop a 3D piece to see who you can develop a more sculptural shape: 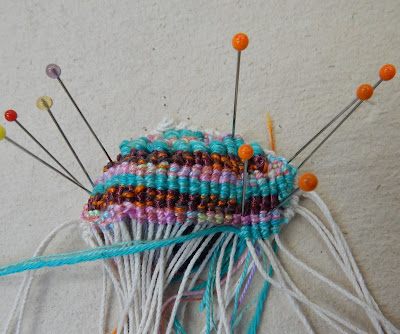 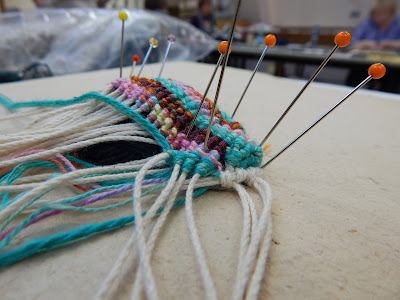 You can see here that I am working on the side that is reducing the need for warps. This requires you to tie off the warps as the knotting proceeds - I found this a bit tricky to judge when to take them in and you need more knots to fill the area out than you expect.

This work is now in progress and once it is finished I will show it in a later post. In the meantime I have been called onto a different project that I have been pondering about for a while and just wanted to try out, so the two pieces will need to run in parallel. Whatch this space for more updates.

Here's a taster - Nails hammered into a block of wood before warping up: 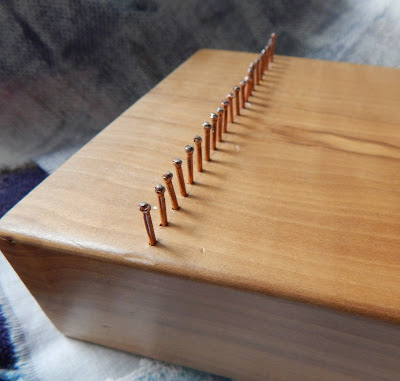 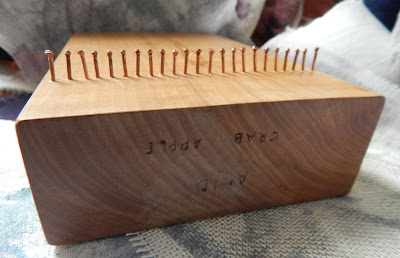 A bit wobbly, but will be OK once the warp is tied on

Posted by LGoldsmithtextileart at 13:13 No comments:

So, it has been a while since I did a course at West Dean and in late August I attended the 5th course in my series of 10. Half way through, and having looked back at soem of my work for the OCA I have to say I think the work is improving, and going to West Dean somehow gives you permission to think in a focussed way about what is happening with the work.

The tutor was Christopher Gilvan-Cartwright. A thoughtful and inspiring teacher who brought us many techniques to try out to give us a tool box of ways of creating surfaces, textures and mark on paper with charcoal, graphite, acrylic paint and ink. There were flattish marks and heavy textures, there were analyses of line and working over te paper in blocks of colour or mass of substance in charcoal or ink.

We each got a table and an easel and he pointed out that we could think about how we want to work - at three levels: on the table, on an easel or on the floor. I tried all three and they each gave something different to how the work developed: in the table  or floor your pour ink, on the easel you can sit back and really look at the work as it progresses.

Here is my table and bit of the floor with work in progress in sketchbooks and on paper (drying where ink or oil bar was applied): 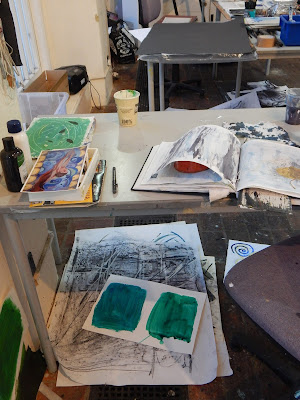 Surprisingly I tried to keep tidy, as the space on the table was quite limited. We were mostly working on A1 or A2/A3 depending on whether finished work was being made, or test pieces to try out techniques were being made.

The 'intuitive' bit in the title suggested we were going to work with Dada automatic drawing, which we did do on the first day, but after that we simply worked very freely with the new techniques being taught. He did mention the idea of the exquisite corpse drawing and I read in the course description that we would be sharing work, but in the end we didn't do much of that, and just got on with our indendent work.

I used up paints in mt sketchbook, used collage and added to some books I had brought that needed to be thought about in a drawing sort of way. The tutor gave some very valuable feedback for the FDAD side of things, so overall it was a helpful and valuable course.

Here are some works I made over the weekend: 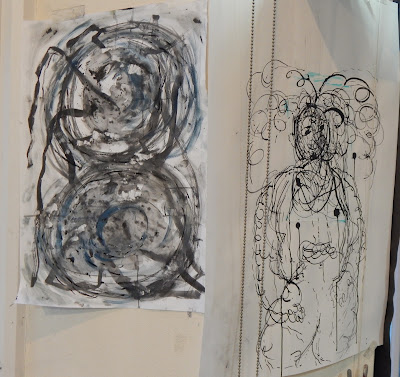 A lot of the work was done in black and white, but I did use some of my XL graphite as it leant itslef well to the large scale of the work and sits well with the charcoal and ink, 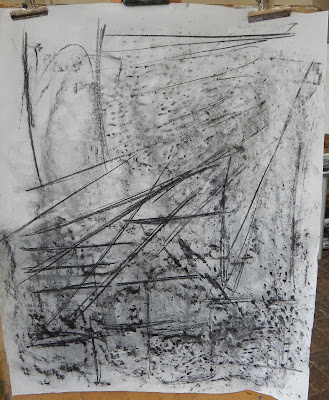 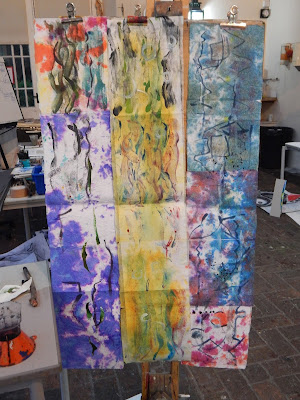 These long coloured things are the concertina books I had brought from home to add to - I have also started stitching on them, so this brief piece of work was just to add a bit of texture in paper or paint. 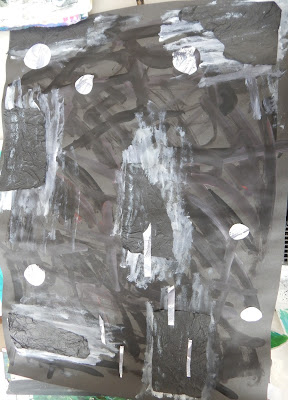 A drawing based on the moon's light that looks better in reality - the black sugar paper is already greyish, but looks even more so here.

Posted by LGoldsmithtextileart at 13:46 No comments: