This post will be a very brief foray into a weaving technique called tsuzure which they use in Japan. It is a kind of tapestry technique, although some items I have that is made in this way seem to have long floating wefts on the reverse, rather than the discontinuous weft sections seen in a western tapestry. That is not to say they do not weave like that as well, my first piece of tsuzure woven fabric was made in this way.

Here's an example of an obi woven in this way 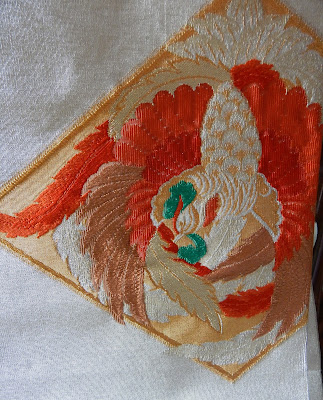 And another in an abstract floral design 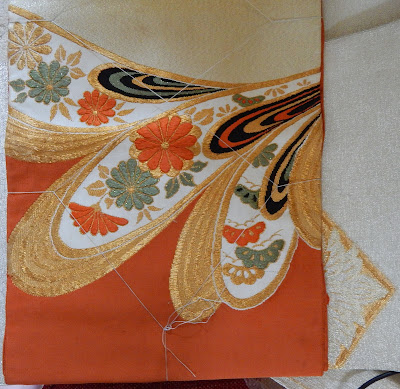 So, the pieces I have that are made in tsuzure technique are all obis. An obi is the belt Japanese women tie around their waists over the kimono. The weave makes the obi a quite solid fabric, and as you can see the woven image is typically woven in one end of the obi across the part that will be visible after being folded appropriately. At the further end there are perhaps two smaller facing woven images, across the part that is folded in half.

There are excellent videos on Youtube that shows how obi are mounted and folded in dressing in a traditional Japanese way. I have selected one on how to tie a Nagoya obi, which you can watch here. And here's another showing how to tie a fukuro obi.

The obi is in a very fine silk weave, and the long sections of the obi that do not have a tapestry section are plain woven. The obi shows signs of having been used, as there are folds from where it has been tied and folded across the wearer. The pattern section of the obi can be of many different motifs - traditional, abstract, floral, figurative, in fact any symbol or design that might have inspired the weaver. Youtube also has a very good short film of a weaver demonstrating tsuzure weaving, which shows an elderly man at a horizontal loom, that looks a bit like a cloth weaving loom, and he uses small bobbins containing a very fine silk yarn.

The Japanese weaving industry has suffered a decline in the later twentieth century, and in order to retain some of the skills there is an educational area within the traditional textile manufacturing area Nishijn in Kyoto that can be visited to see how weavers and fabric designers work. I haven't personally visited this place, although I would like to, there is something a bit sad about a once-glorious textile art now being mainly visible as a tourist spectacle. The industry has traditionally been organised around small family weaver makers working on obi and other precious textiles that are supplied to centralised manufacturers (Hareven, 2003). Hareven's book is an anthropological study of the weavers of traditional Japanese textiles rather than a book on the textiles themselves. It is a vehicle for the voices of the small weaver families to give them the space to talk about their work and describe how their lives have been shaped by their trade and skill.

I am always in awe at how wonderfully simple, but always so exactly right, Japanese packaging is. The people who sent me the obi use a postal bag made of brown paper, in which the obi is either rolled or folded into a neatly folded piece of bubble wrap. 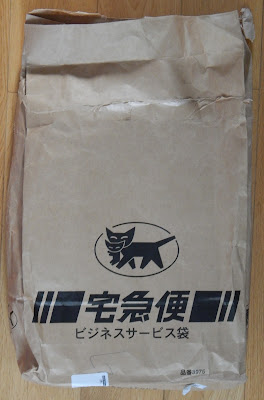 And this time there was an additional piece of packaging which consisted of large sheets of white paper, a couple of sheet were folded into a bag which was in turn placed into another folded container. The sections were stuck together with smaller triangular pieces. Here are some pictures which I hope show this construction: 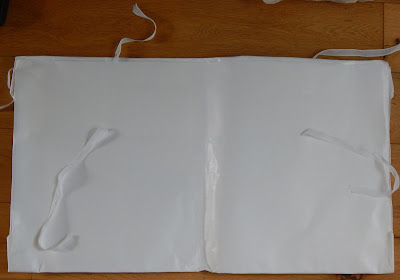 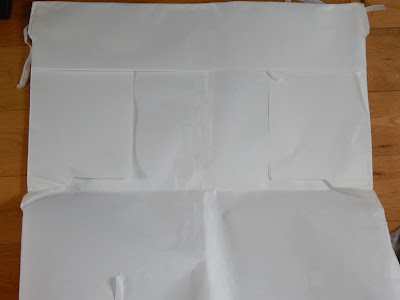 Not sure this shows how the sections were attached, but this is where the pieces join: 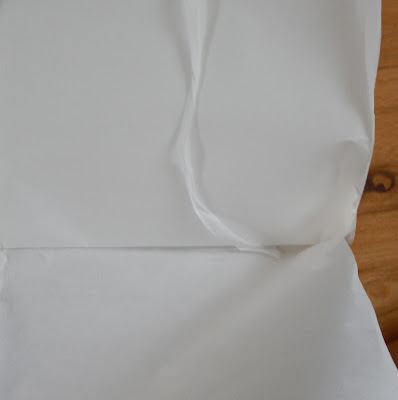