You may already have seen pictures of my small pre-sample for the final sample in
project 9. 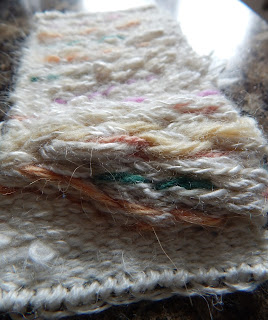 I have decided not to pursue the idea of the surface of an opalescent shell, as this would just be a disappointment as the work would be a bit too much about the yarn in the weave and less about representing the shell. I still think I want to use the soumak technique of increasing the weft to make a surface relief. And so, since my recent focus has been on trees, and the final piece is in sight, I will use this sample to work through greens, i.e. look at how the undulating surface might suggest moving leaves, the bulk of bark or just plain green surfaces of light and colour, suggesting the essence of light passing through leaves.
This means I can work more freely, not be worried about whether I can grasp the smoothness of surfaces, but work with the feeling of the three and nature instead. That is such a relief, and much more the way I work in any case.
In preparation I dyed some cottons and linens in a green, which included the warp yarn: 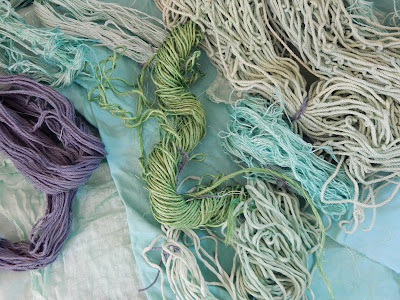 The colours are much stronger than seen here, but you can see that the sisal took the dye very well. It is unlikely though, that I will use the sisal yarn in the tapestry.
I used this picture as my reference: 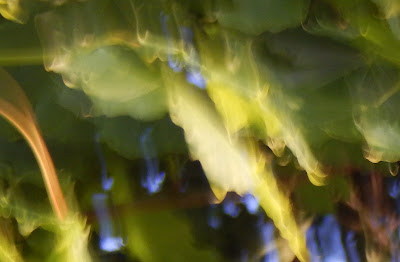 And here's the work in progress. The bottom section is a flat eave with a mixture of eccentric and plain weave where I started to blend various greens, browns and sandy coloured yarns - both handspun and commercial. The yarns are almost exclusively wool, although later I added linen and a cotton ribbon yarn. Again it is hard to see the green warp, but I quite like the green warp thread. The one thing to notice compositionally in this picture, is how straight the line that indicates the start of the soumak section is. You will see later, that I tried to soften this, as it was a bit too diagonal and not quite 'organic' enough for any suggestion of leaves. 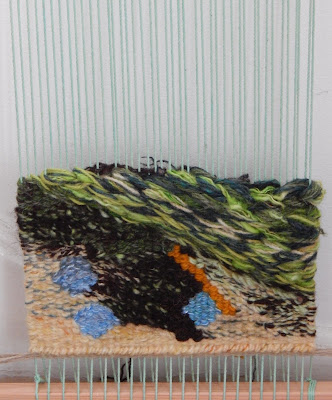 A close-up of the soumak in progress. At this stage I was working with 8-9 strands of sometimes quite thick weft threads. 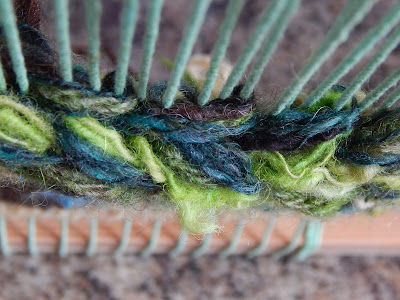 A detail to show the first transition from the plain weave to the soumak. The first line of soumak was done pretty systematically, carrying the weft over just two warps each time. After that I increased the warp numbers over which the weft was carried up to 4 or 5, and these jumps were more random. 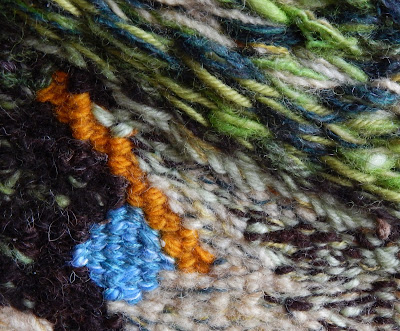 The final sample is a bit bigger than I had originally foreseen, as the middle section of flat weave had not been part of the plan. That is OK though, as it helps bring out the relief in the two parts of soumak weave. 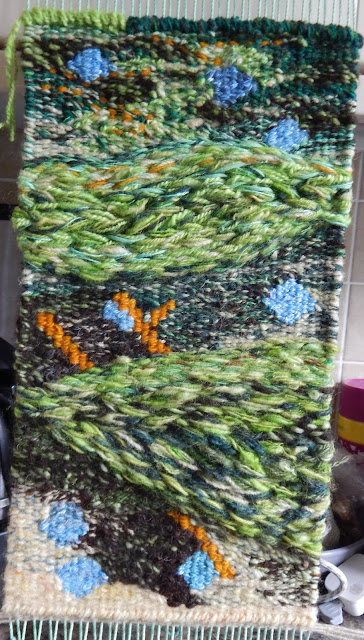 On this picture the sample has not yet been cut off the loom. And the colours are not as strong as in reality, so it looks a bit flat here.
I will list a few things I learned:
The back of the soumak section looks great, and if I could find a way of weaving in the weft ends I would try to work to reveal the back as well: 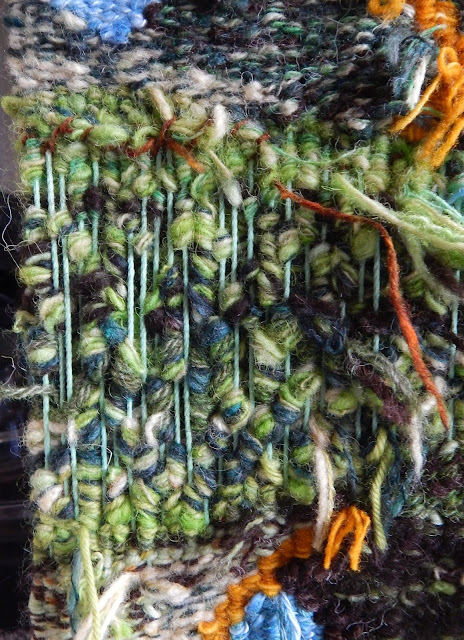 On the back the areas where the weft has been looped around the warp there is a knotted effect, and the warp stands proud from the soumak surface on the front and gives this visible vertical effect. I like this effect on the reverse very much.
Posted by LGoldsmithtextileart at 07:14