This weekend I went on a workshop with Caron Penney and Katherine Swailes. They are, or have been, tapestry weavers at West Dean College, and make work in their own right. This workshop was a mixed ability class, and there were people there who had never woven before and other who had woven for many years.

The course was run in Arundel museum, many miles from where I live, and it took two hours to get there, over rolling hills, along fast roads and through pretty villages. Hampshire is so very English in its landscape - hedgerows, woodland and arable fields. It was a very enjoyable trip. I listened to John Stein beck's The Pearl as an audiobook in the car. It is a great story, I read it when I was a teenage, enjoyed it then, and it is gripping, touching and true throughout the terrible tale it is telling.

Anyway, the class was split in two depending on what we wanted to learn: Penney was introducing tapestry weaving to newcomers and spoke on blending and interpretation of designs. Swailes works intuitively and experimentally with materials, which is the way I am inclined, so I joined that set to learn some new techniques, working on the surface of the tapestry. Katherine Swailes showed some samples she had made. In one case she had placed black wax behind a small piece and heated it with an iron to make the wax melt into the fibre, and oil had then seeped fro mthe wax wider into the tapestry creating a dark halo effect. She had also done the same with another sample, but instead of ironing it she had zapped the piece in the microwave for a minute which had melted the wax onto the back of the piece and burnished the fibre around it. That was quite effective, the burned fibre was tonally darker but blended well with the unburned base fibre. 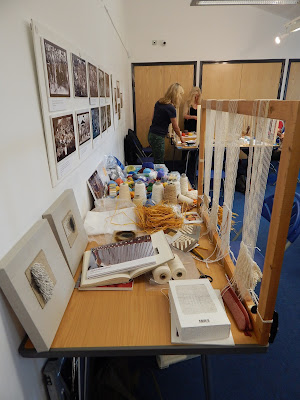 A table of reference material - a book on Coptic tapestry, Katherine Swailes' samples, a frame loom with samples in progress for demonstrating technique.


It seemed to me both of them work with very simple motifs, paring designs down, down to elemental shapes - whether geometric shapes in Caron's case or working with the structure of weaving techniques in Katherine's case. There were a number of techniques to learn, including creating loops on the surface, carrying over floating wefts and weaving some of these as crosses.
I decided to use the day to practice some of these techniques to learn them properly and have a record of these. Since my work on this course is moving into trees I chose to work with greens. Hence the foundation fibre was a blend of pale green, thin wool and a white linen (I love this linen, it is from Texere Yarn, I have some at home and look at it longingly from time to time, waiting for  project to come along when I can use it). To keep things easy I went for a 50-50 mix of these, with the exception of a centre section where I reduced the green and added a linen strand to create a contrast to the loops which became tufts of bright greens.
Here's the sample: 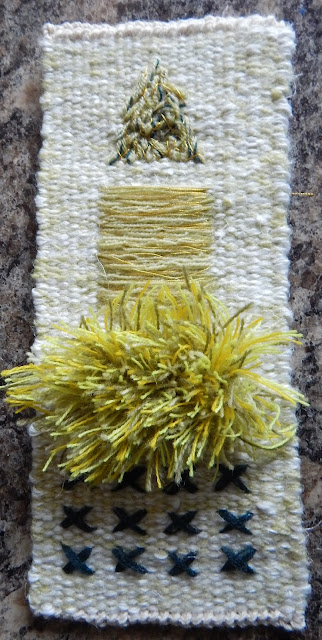 From the bottom - crosses of floating wefts, loops cut open to create tufts, wefts carried over in greens and gold, and the top elements started as random vertically inclined wefts. This last element was not terribly successful, so when I got home I added to the padded nature and randomness by embroidering strands over it. On the photograph you can't see the green wool in the background very well, but it was there to balance the whole. I liked that, it softened the pure white. One person did weave with a pure white slightly heavier weft and the beads (the bumps of weft lying on the warps) cast bluish-grey shadows across her sample. Katherine thought the tufts were an 'explosion'. I liked that, I wanted some drama in the thing, so often samples are just a flat record, but here I was striving to create a 'nice' sample, so that it would be a more pleasurable thing to refer to.
Posted by LGoldsmithtextileart at 13:53