Stage 4 Exercise 2 asks us to collect various threads and fabrics together on a mood and/or theme, and create colour-based bags of textile. I chose some picture postcards of works by Emil Nolde (a watercolour of lilies from his garden), and landscapes by van Gogh, Cezanne, Galle-Kallela  and Ribemont-Desaigne. Most of the colours for these are greens, greys, blues, blue-greens and in the case of Cezanne the dry Provençale earths are pale and sandy, whilst Nolde’s flowers burst with organgey tinted dark reds. This is because I am thinking about trees and natural themes for the independent project and I might as well think about this early on.
I have a fair few green and blue fabrics and threads, but thought that maybe as the day was sunny and there may be other projects to come where I can use other colours, I would do some dyeing.


Using Dylon cold water dyes in purple, yellow and a pinky red I decided to dye smaller pieces of fabrics in synthetics, silk, cotton, as well as some perlé knitting cotton, which I am planning to use for embroidery. To get a wide range of tones I started dyeing the purple. I discovered once that by adding some of the fabric after say, 10-15 minutes, a lot of the dye will have been taken from the water and any later fabric additions will be paler. This is helpful if you want a wider span of tones of a certain colour. I never weigh the fabric, I am not looking for repeatable colours and prefer to experiment. Also over-dyeing is interesting and can bring pleasant surprises.

So, I started with the purple and the yellow. Some of the fabric was commercially pre-dyed, orange and red, and some finer fabrics a pale flesh colour. Purple on top of orange made a grizzly grimy green-brown. I am sure it will come in useful, but it does not really do it for me, it may be good later combined with yellow and other browns. Yellow on purple similarly has turned an odd greeney brown. I should have taken that out of the bath early on as the initial grey-green was quite good, but leaving it in the dye bath has meant the yellow turned it a bit too brown. 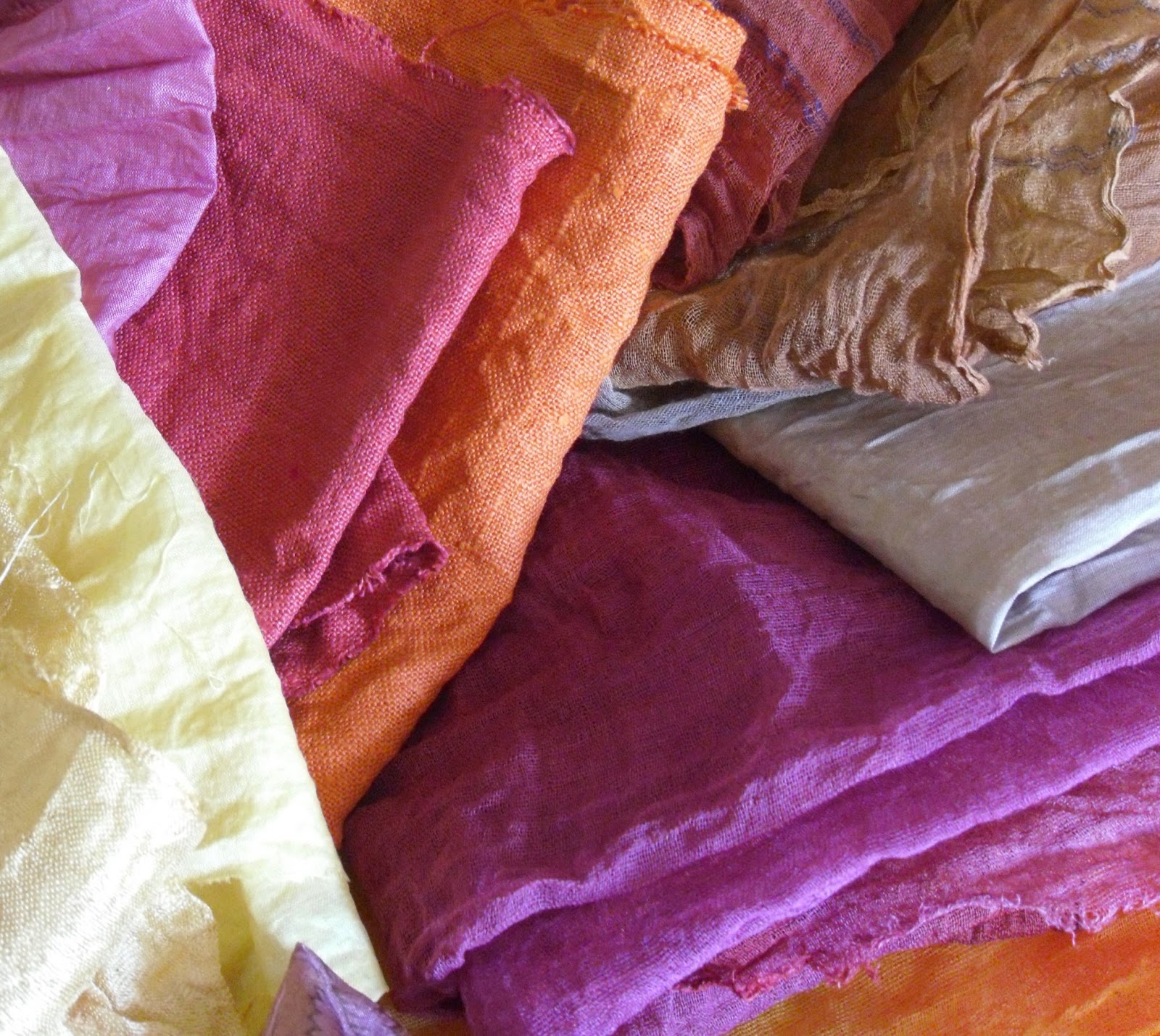 When dyeing the dark wine colour I added some yellow and purple swatches from the earlier dye baths. I also added some blue silks, and made some paler pinks later. The blue silks look great – they turned a vivid purple, and the yellows with wine have turned variations of softer wines and dark pinks. I think in hindsight I should have dyed some more yellow, as I thought that with the remaining dyes I have (two dark red/wine and a pink) that I would do some tie-dye, maybe even some shibori, so that the effect fabrics can be used for future projects. Yellow would have looked great with the red on top. 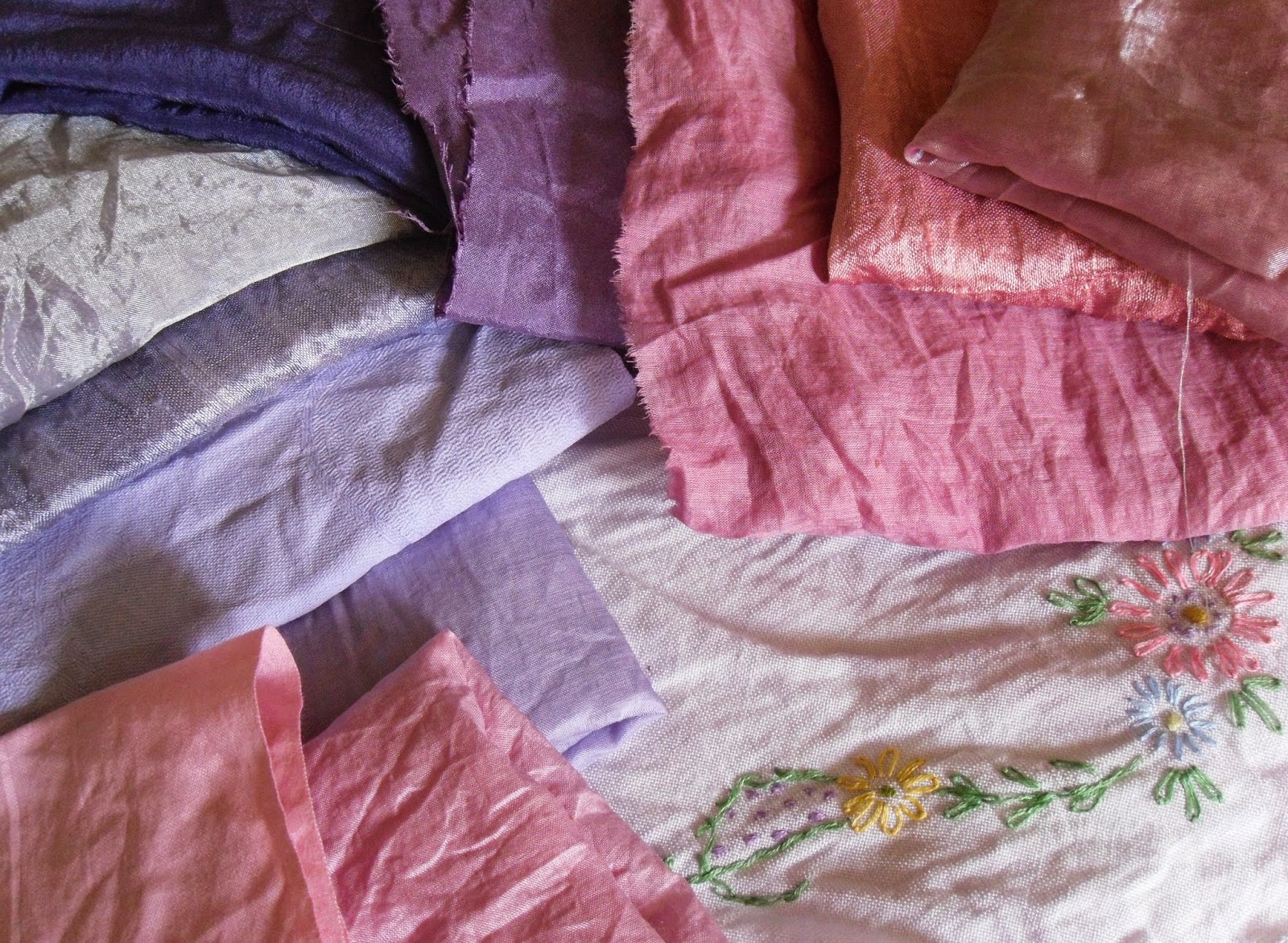 ﻿
At the end I added a synthetic doily with some embroidery on it form the 1960s-70s. Sometimes these were made with a viscose mix and I had hoped that perhaps that would have picked up the purple. It didn't really take the remainder dye, probably due to the mix of synthetics and the late addition to the dye bath.
Posted by LGoldsmithtextileart at 03:31