I mentioned in another post that I recent visited the Nolde Stiftung in Seebull, northern Germany. This is a wonderful place. When Nolde died the collection of his art work was left to a foundation that now house his works and present them, I think, on an annually rotating display to show different work every year. This is great, it means that the watercolours are protected from excessive light, and it means that visitors get to see a fresh display if they return.

Last time I was there was perhaps 7 or 8 years ago. Since then the Foundation has build a splendid new modernist building with a big shop, a good restaurant and educational rooms. We spent the first hour there viewing a documentary film of Nolde's work before going to the dislays themselves which are shown in a building Nolde designed and had built in the late 1920s. Here's the Nolde house seen from a small patch of garden, which in early May does not have many flowering plants in it: 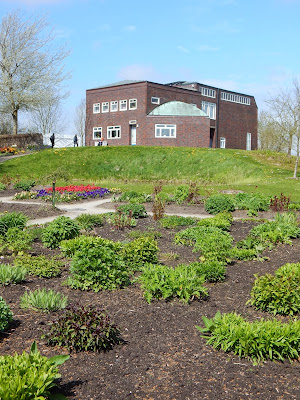 Maybe I should admit to be a bit of a collector-hoarder myself? I have a substantial collection of embroidered table cloths, tray cloths and other linen. Most of it is not great works of art, but there are some very good pieces, and I have an amazing Danish arts and crafts table cloth which I can recount a great tale of finding and treasuring. I also did a bit of work on collecting once for some written work and read a small article by Walter Benjamin where he speaks exactly of this pride in finding a wonderful specimen (he collected books) at a particularly good price, or containing a somehow unique quality. But something can happen when the collection takes over, in terms of volume and value: you need to start investing in all manner of conservation materials to preserve the pieces, and you know that no-one else will have the same feelings you had in treasuring the collection, so how will the things be treated if you were unable to pass it on in trust? I haven't seriously thought about whether anyone might be interested in some of the better pieces, but have been thinking that it is probably time to start making something from the lesser quality items. The linen is still good, even if the lazy daisies are boring or faded, so maybe something useful and contemporary can be gained from this?
Posted by LGoldsmithtextileart at 09:03