Cities can be wonderful places to go on holiday - art, architecture, music, history, it is all there to explore and find. We recently went to Austria to visit Salzburg and Vienna, with a quick visit to a small place called Werfen.

Salzburg was the seat of princes and bishops during the 16th and 17th century, and continued to be a regional capital for centuries. It was also the city Mozart spent much time in, it provided the backdrop to the Sound of Music, and is generally a photogenic place, which people visit. So there are a fair few tourists there, but they didn't seem to be in the city museum, they were at the castle and toured various sights which we also visited. 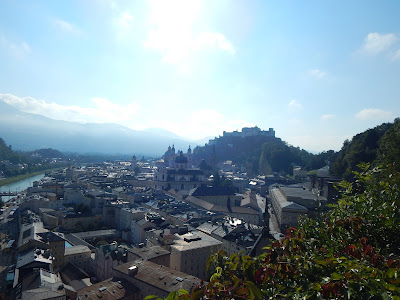 The old city centre here seen from Museum der Moderne, looking across to the castle. I think you can see the narrow streets, and the small squares between the buildings. Below is a close-up of the towers of the cathedral and other churches. 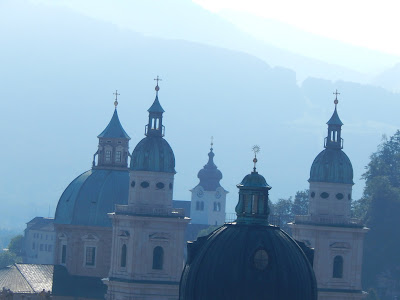 Where to start? This needs perforce to be a summary of the visit, so I shall just mention some of the key areas of art that interested me, and will show a few impressions.

We visited the Museum der Moderne (Museum of modern art split into two separate places in the city), the cathedral, the Hohen Salzburg Castle, the City Museum, other churches and generally walked around the city. There was just too much to see and experience to share here, but I will show some pictures of beautiful, unexpected details that can be found as you walk around the old part of the city. The below will be impressionistic shots of architecture: 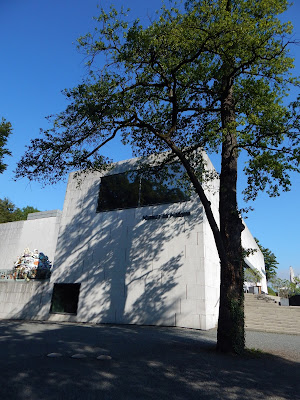 Museum der Moderne: when we visited the exhibitions at this site were of 1960s and 1970s performance art. This was quite interesting, in particular the work by E.A.T. (Experiments in Art and Technology), an American group of artists who used technology in their expression, for example in the Pepsi avillion in Japan in 1970, an impressive experiment using sight and sound and immersive environments to stimulate visitors. Interestingly they used personal audio devices for visitors, the types of audio devices we now take for granted as optional in museums.

the other site of Museum der Moderne had a show on of Charlotte Salmonon's work. This was interesting from the perspective of how autobiograhical her gouache/water colour works were. She painted a lot of these paintings during the 1930s and early 1940s, and looked back at a relatively happy childhood that then seemed to grow into an adulthood of tense relationships, and then the disturbances of war, her diaspora into France from Germany and then the narrative ended and the disaply explained she had died in Auschwitz. There were many many pictures here, mostly dark and brooding. I thought one was interesting in the way she had drawn up her boyfriend's reclining body and then repeated it down the page and in the process creating a pattern. There was a lot of text drawn up around the images. It was striking how this use of the study of the self was used in this work. Not unlike a strand of contemporary art that uses the self in representation, these drawings/paintings drew on Salomon's life to describe a modern woman's thoughts in Berlin in the interwar period.


Walking around the old city

There were so many different details left on buildings to study and enjoy: 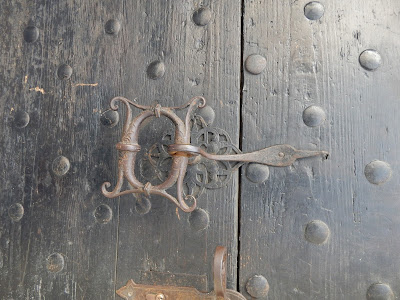 An old door handly on an old door. 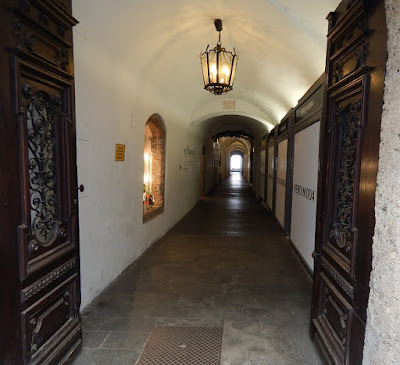 One of several passges you could walk through from one road to the next, often ended by old doors and some with shop windows. 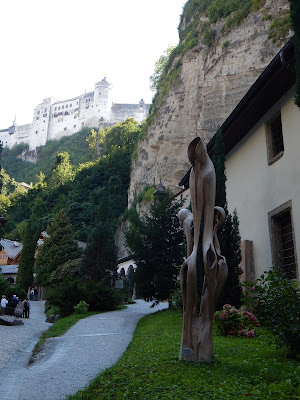 On the way to the cemetery of St Peters, here a modern wood-carved sculpture, ancient rock and the medieval castle, Hohen Salzburg in the background. 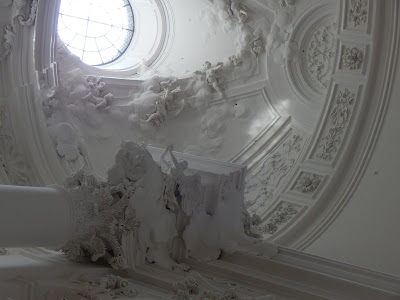 A very beaurtiful baroque church had wonderful stucco in white marengue-like clouds, with putti floating generously through it all. 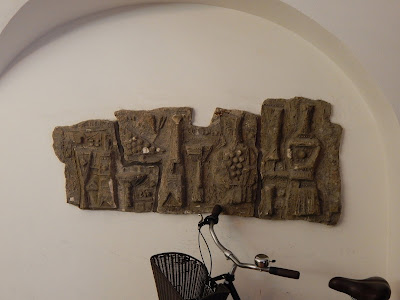 Salzburg has along history of being ruled by Catholic Princely Archbishops and even in more recent times the Christian faith could be seen in modern renditions such as this relief panel on a wall and in the same corridor a saint in colourful tile-work. 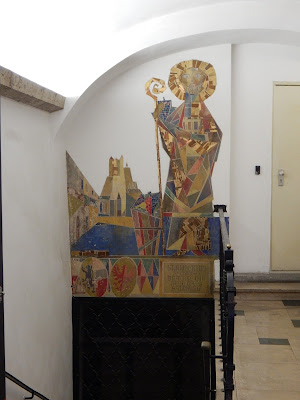 It really was a joy to find all this history and ways of making connection with life in the city. Here are some bell-pulls, I am not sure whether they are still used: 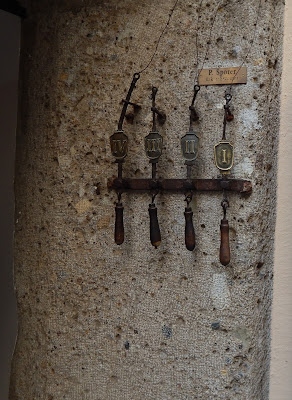 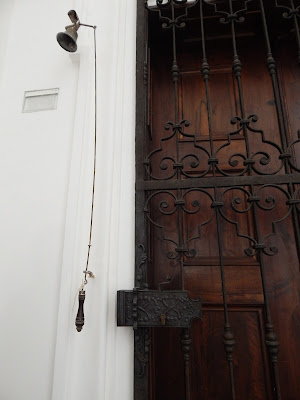 A ram's head on a large iron gate flanking a concert house in the city centre: 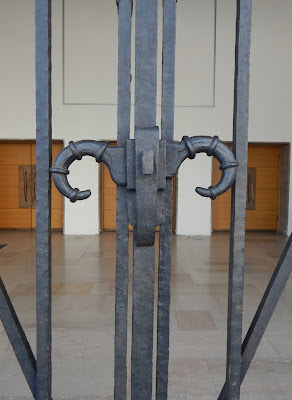 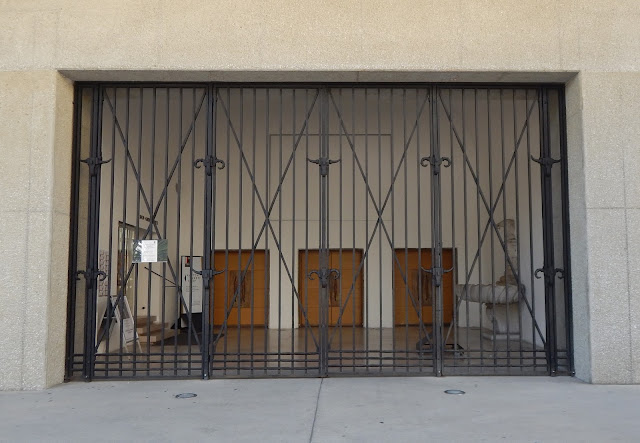 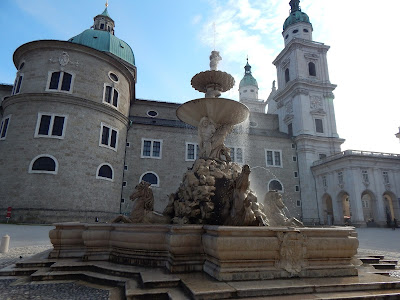 And the famous fountain next to the cathedral which stands alone in an open area, on one side the Salzburg Museum stood, which housed great collections that we enjoyed in almost solitude. This museum had a number of displays of which three were really enjoyable - first a display of landscape paintings, watercolours and prints mainly from the late 18th and early 19th romantic period. There were conventional landscapes of the Alpine landscape around Salzburg, but there were large drawers which could be pulled out to reveal prints advertising the landscape, sketch books by artists, and watercolours. There were vertical stands of prints which you could pull to the side to reveal each print in turn, and in this way there was a lot on display without over-hanging the walls and prevent over-exposure of light on the works on paper.

There was also the gallery of musical instruments, really the best one of this type I have seen - here there were instruments, some recognisably violins and violas, horns and zithers, but some also slightly strange such as violins with horns, a contra-base type of instrument to be thumbed, that would make a trumpet-like sound, a steel piano that was used for the Glockenspiel tune in the opera The Magic Flute. Alongside each instrument was a monitor and headphones showing the instrument being played, using music of the time of the instrument, as well as introductions to opera and choral work. It was such a treat to go around exploring this, here the instruments were alive with sounds, played by talented musicians, a great aspect of this central European culture that otherwise would be confined to concert houses and the radio.

And lastly I got very excited when I learned that there was an early 19th century Panorama at the museum. We had panned this visit in advance and I looked forward to this treat, as I had read about panoramas during my studies, and here was one, complete, showing a 360 degree landscape of Salzburg at the time. It had been taken around Europe on a tour that lasted 10 years and would have introduced many people to a city they may not even really have heard of. It was very detailed, with trees, mountains, streets and streams all shown in a daily-life sort of way, with washing drying on the grass and people walking about attending to their daily deeds.

There was of course a huge amount of other things to say about Salzburg, about the castle, about puppets, about the Mirabell Gardens, but that would just be too much for this place.

Lastly I will show some pictures from a haberdashers shop which lay in the heart of the fold town in as complete a 1950s state as it could be, all the way down to the small white card boxes they used to store their buttons in: 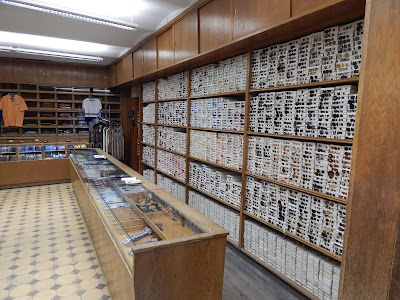 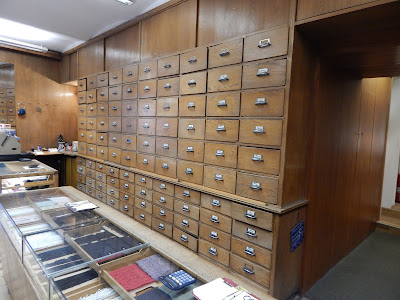 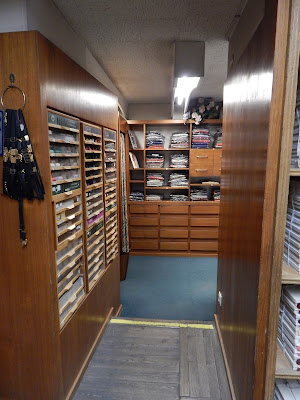 We the spent a night in Werfen, where a certain castle is better known as Schloss Adler from Where Eagles dare, a film in which Clint Eastwood manages to kill a lot of nazis, and seems to be a cult movie. The sleepy town was pretty and the castle looked great and imposing amongst the mountains: 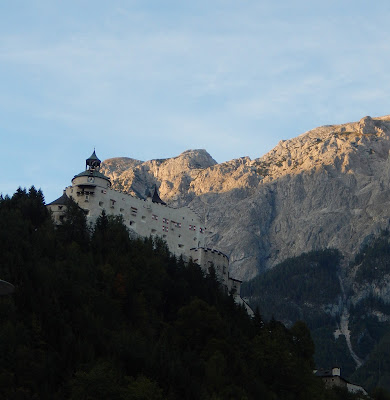 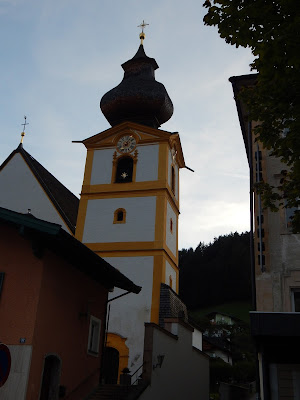