I had a great Saturday of just experimenting with printing, stamping and painting on fabric. It was almost as if I needed to get something out of my system, having felt blocked at times during this module. On that day there was no ties to designs, but just spontaneous mark making and impulsive compositions. In no particular order, this is what came out of that day:

A sample using the stencils I had developed for the printing on paper exercise. The design is open although I superimposed one of the stencils onto itself and turned it slightly. The thickness of the paint was important, too wet and it bleeds under the stencil, too dry and it would not paint smoothly enough: 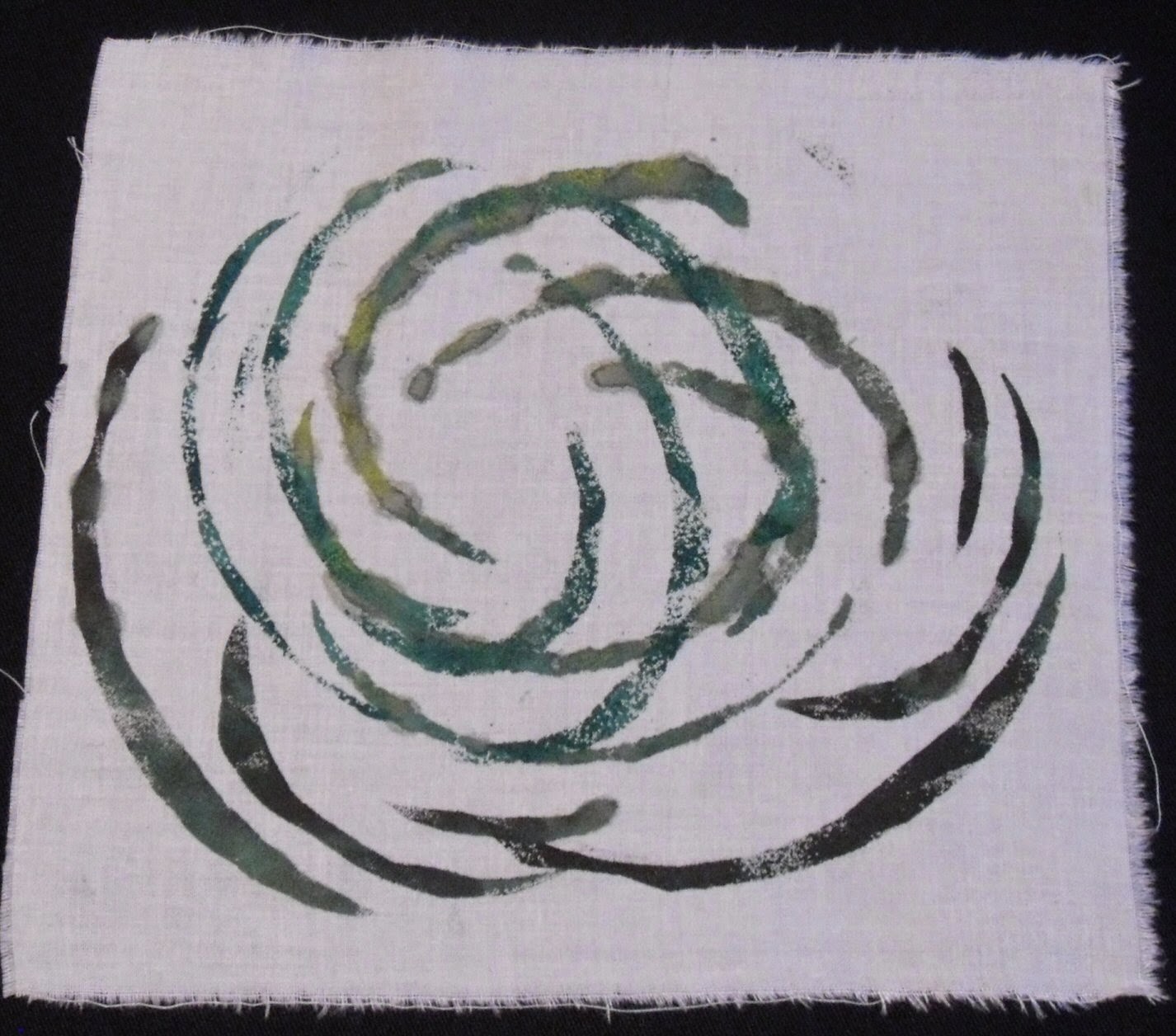 Using bleach to remove dye from a dyed piece of linen - very effective. I also bleached a sample of black heavier cotton, which had an interesting effect. For this one I just painted with a brush (for the black sample not shown here I used a foam pad to make squares): 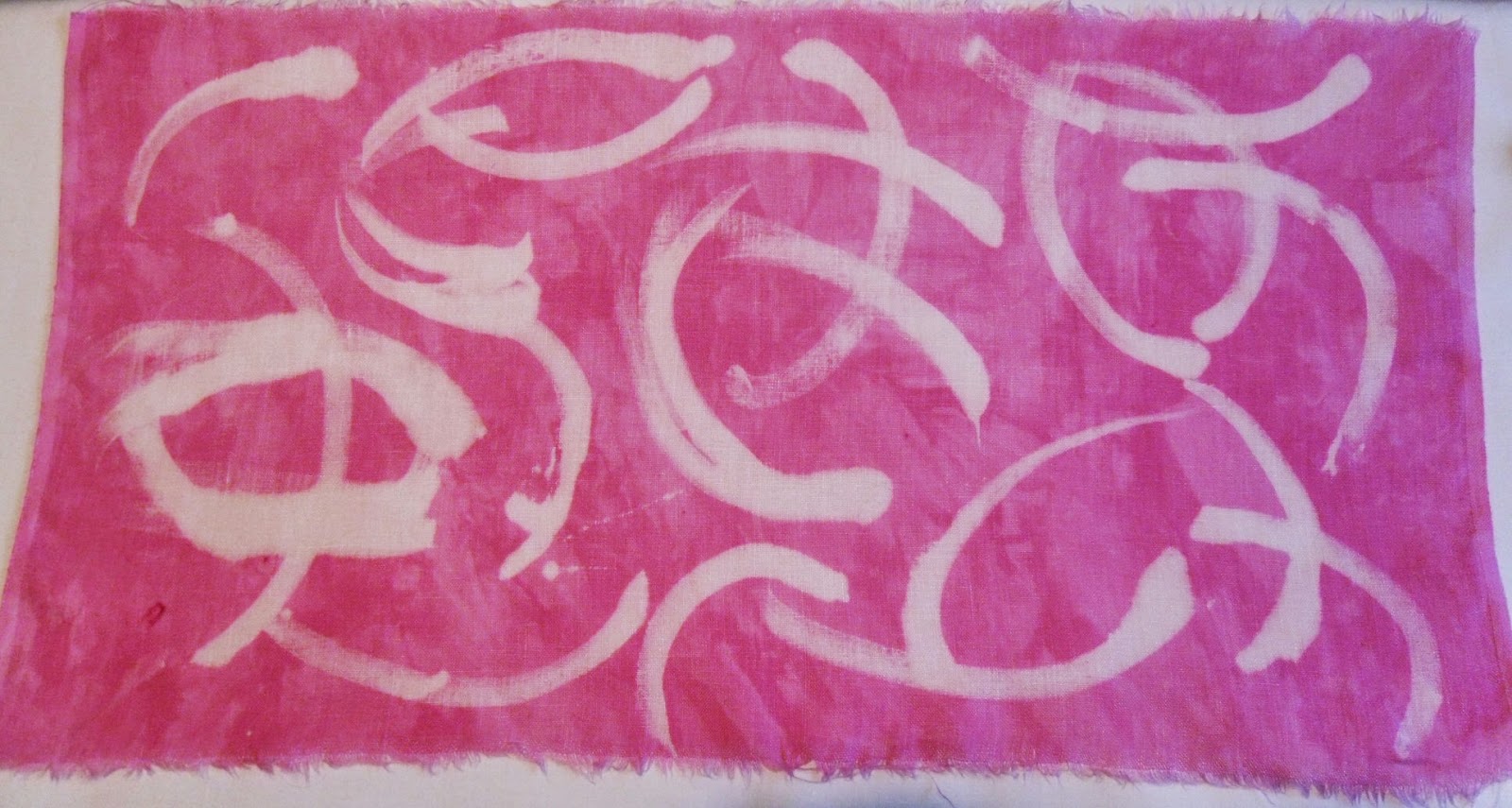 I had printed some relief patterns onto a heat-sensitive block. This did not work so well on paper until I discovered the dilution of the paint necessary. And it needs a smooth surface to print on so I used some cotton with a smooth side (thanks to all those charity shops out there that provide endless supplies of great stuff). Here the print is respectively some random jabs and lines marked onto the block (left) and some coarse linen lace (right): 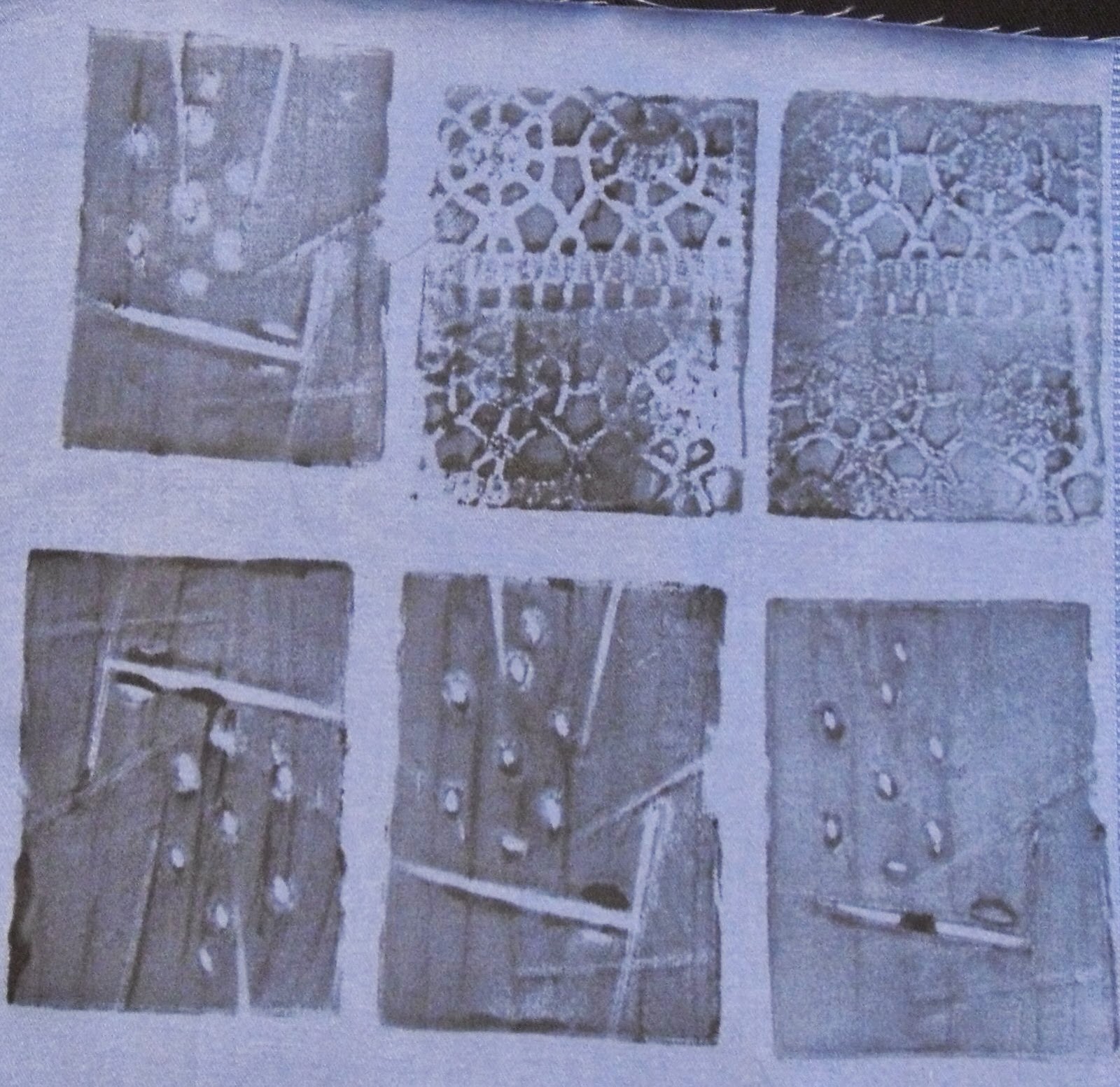 Here a print using a large-scale bubble wrap, using a variety of colours and managing to catch the registration of the first print when printing the second run to make sure some of the colour lines would sit naturally next to each other. The print was made on a piece of cotton stained in tea using browns and greens: 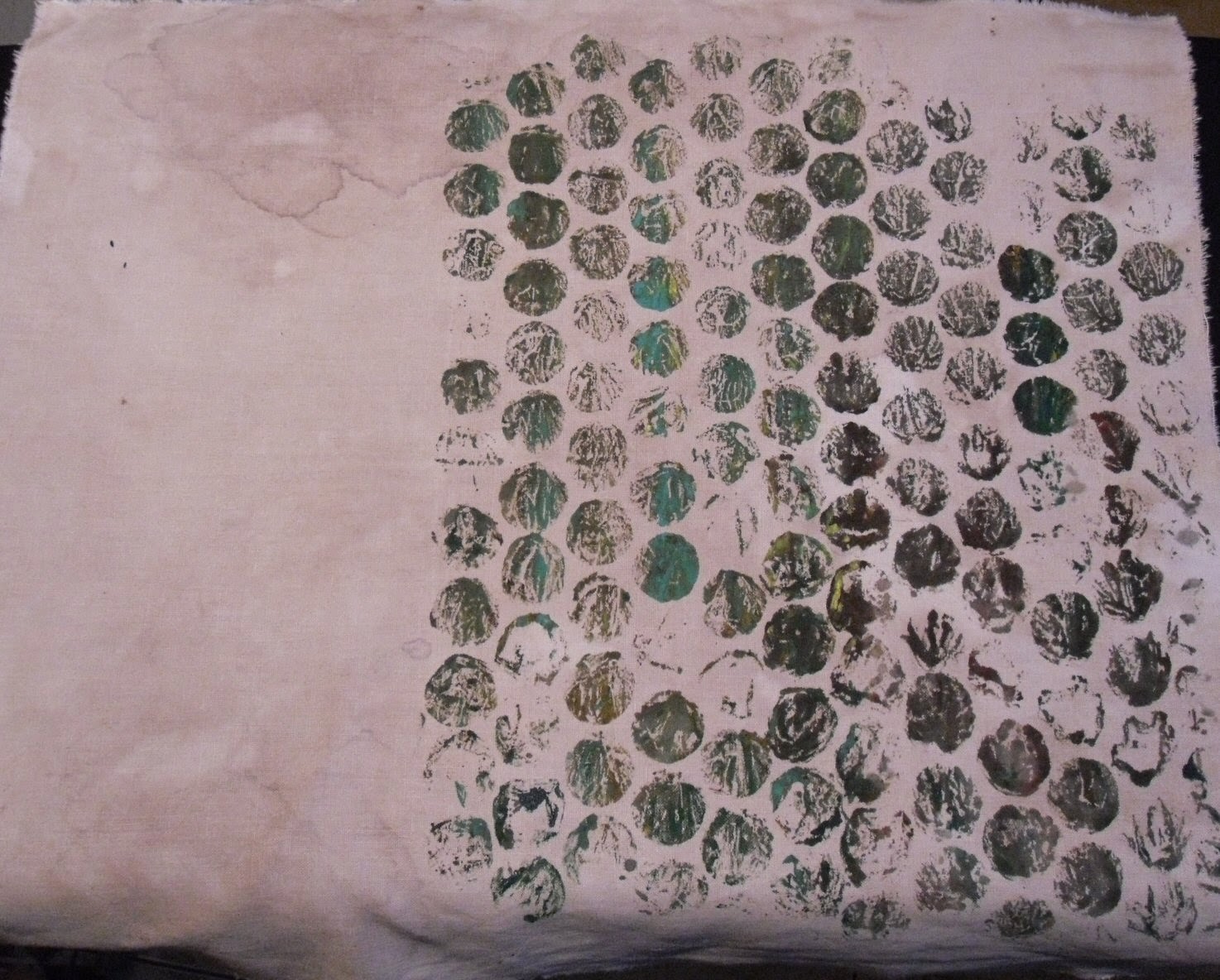 Here a sample using small bubble wrap and a rubber printing block. I tried to balance the rectangles across the surface, making sure that where overlaps would cause densities in the print or asymmetries developed that they were counter balanced by the smaller blocks in blue over the orangey-brown print. Note that I chose a black background to work out how this looks in contrast to the lighter fabric used in the majority of the samples. The black ground creates a more subtle effect and colours become more luminous, interesting. 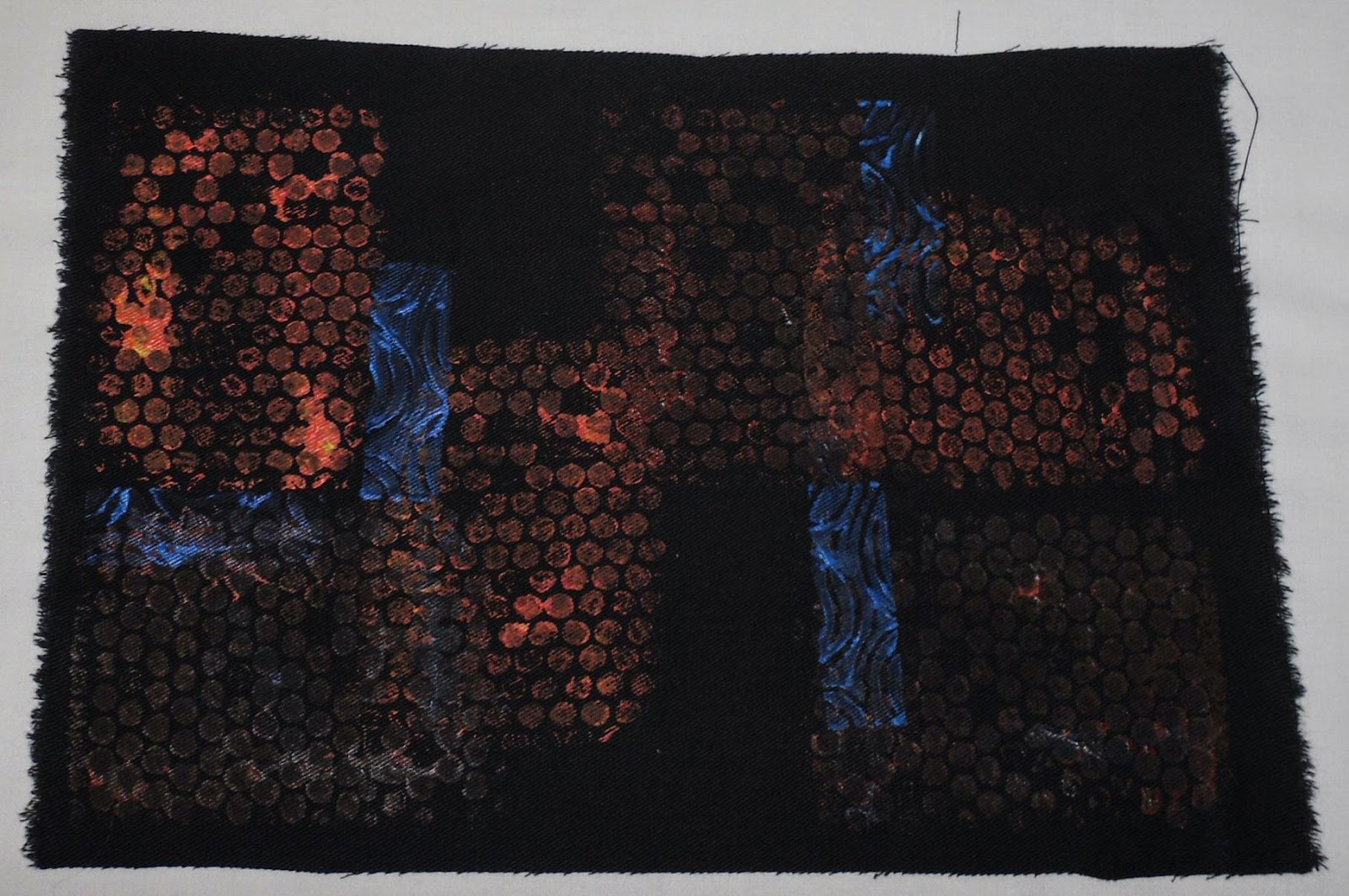 A painted background with 'fish' prints from a foam block. More of a doodle than anything 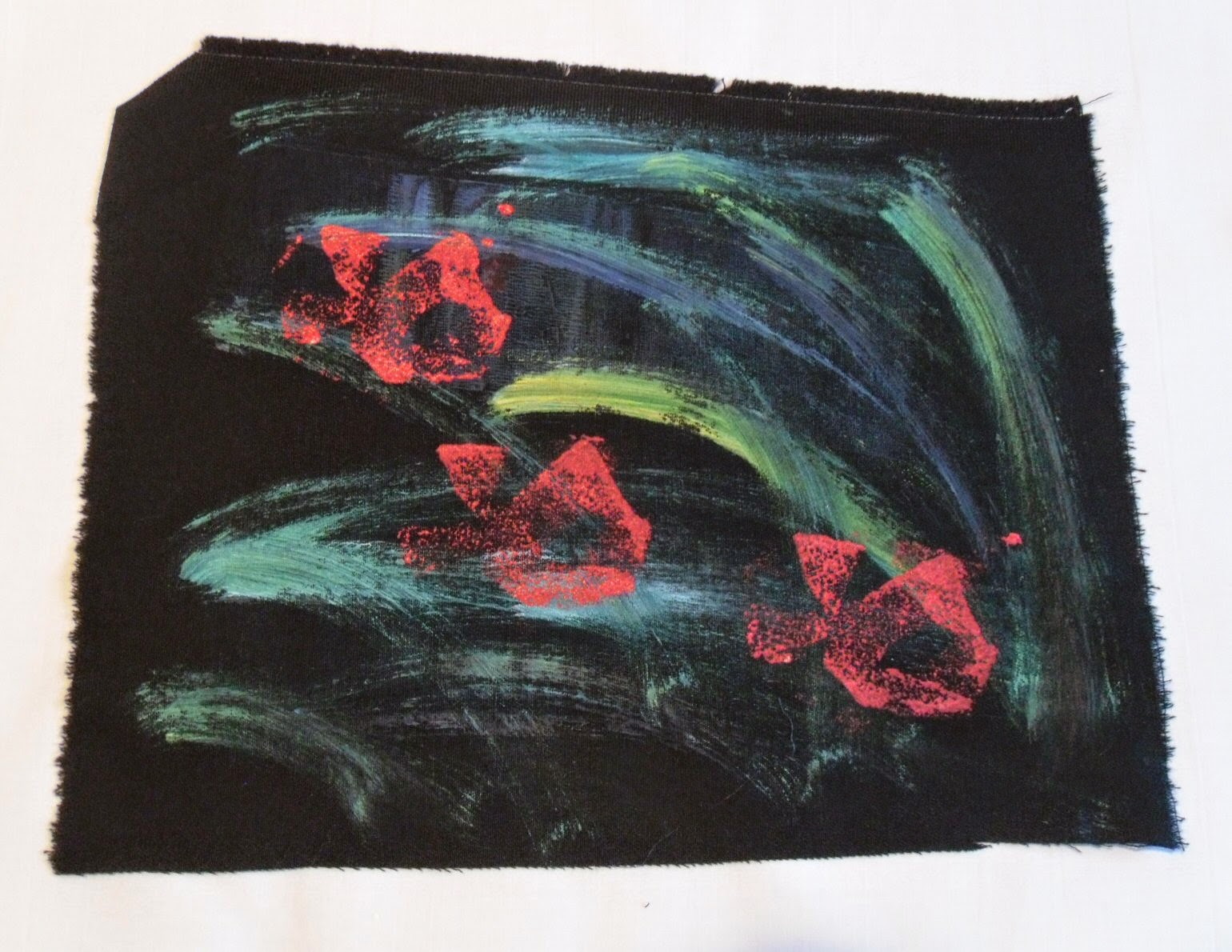 Some more painted fabric, this time a dyed cotton doily, cut in half. Swirly painted lines with prints in yellow and green stamped on with a cork top. 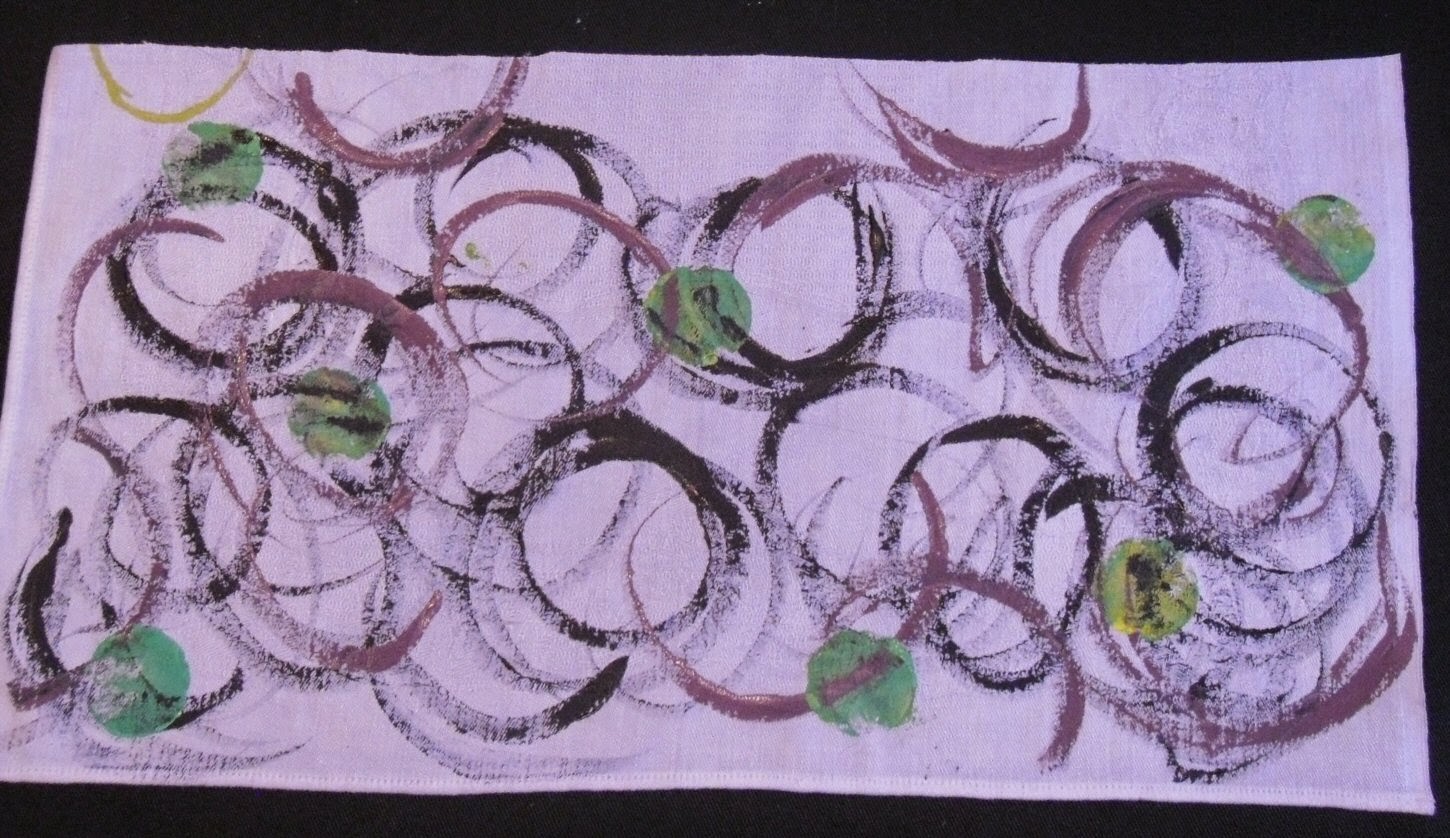 The other half of the doily with bubble wrap print and circles from a toilet roll tube. In these case the colours and dimensions of the design elements create the tension and dynamic relationships that make the samples more interesting. Where prints from bubble wrap sit with no over printing it makes for a static effect (as in the above). 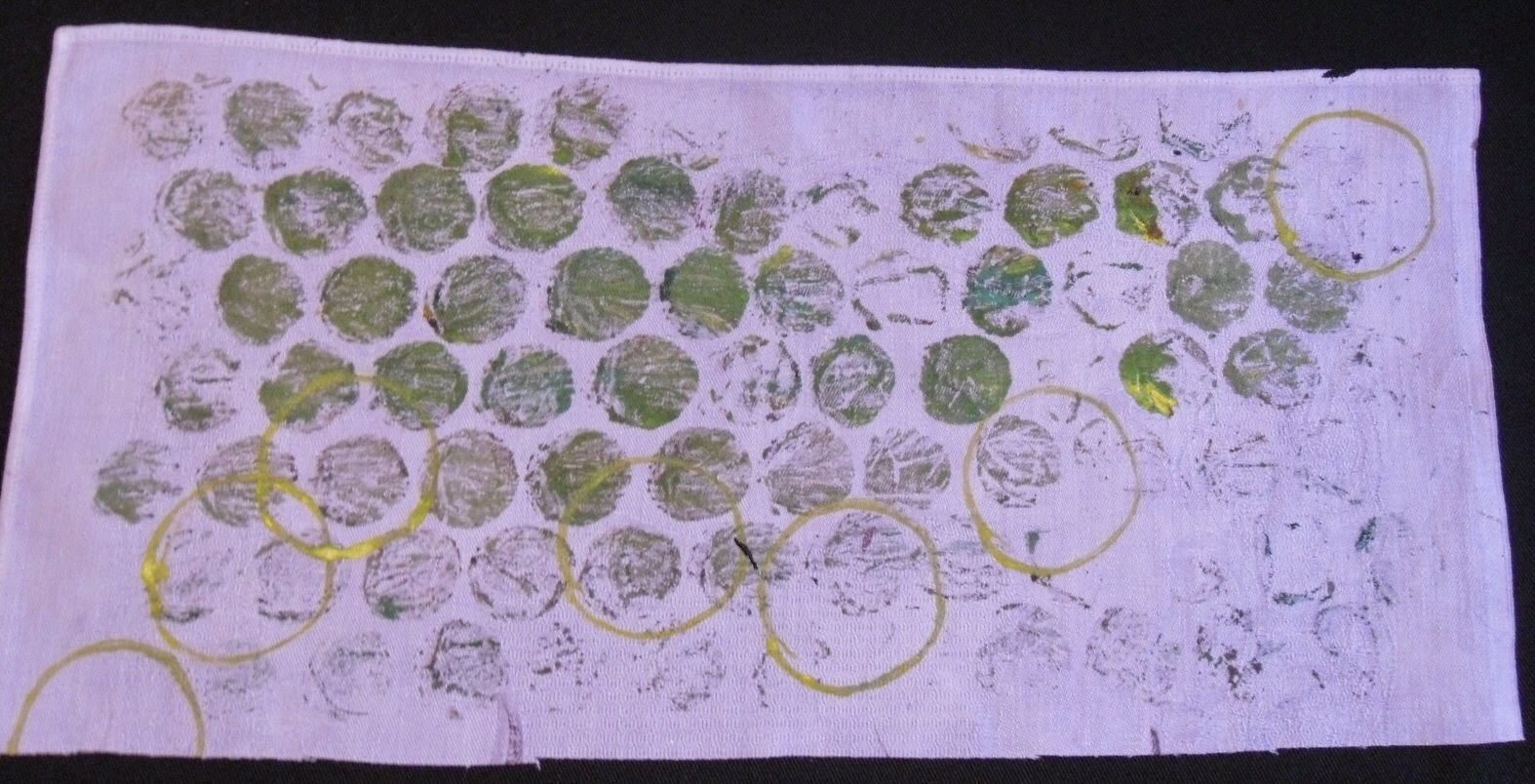 These two samples had fairly random background made (failed prints/stamps and dabs) with lines of block prints from rubbers running at angles across the surface. 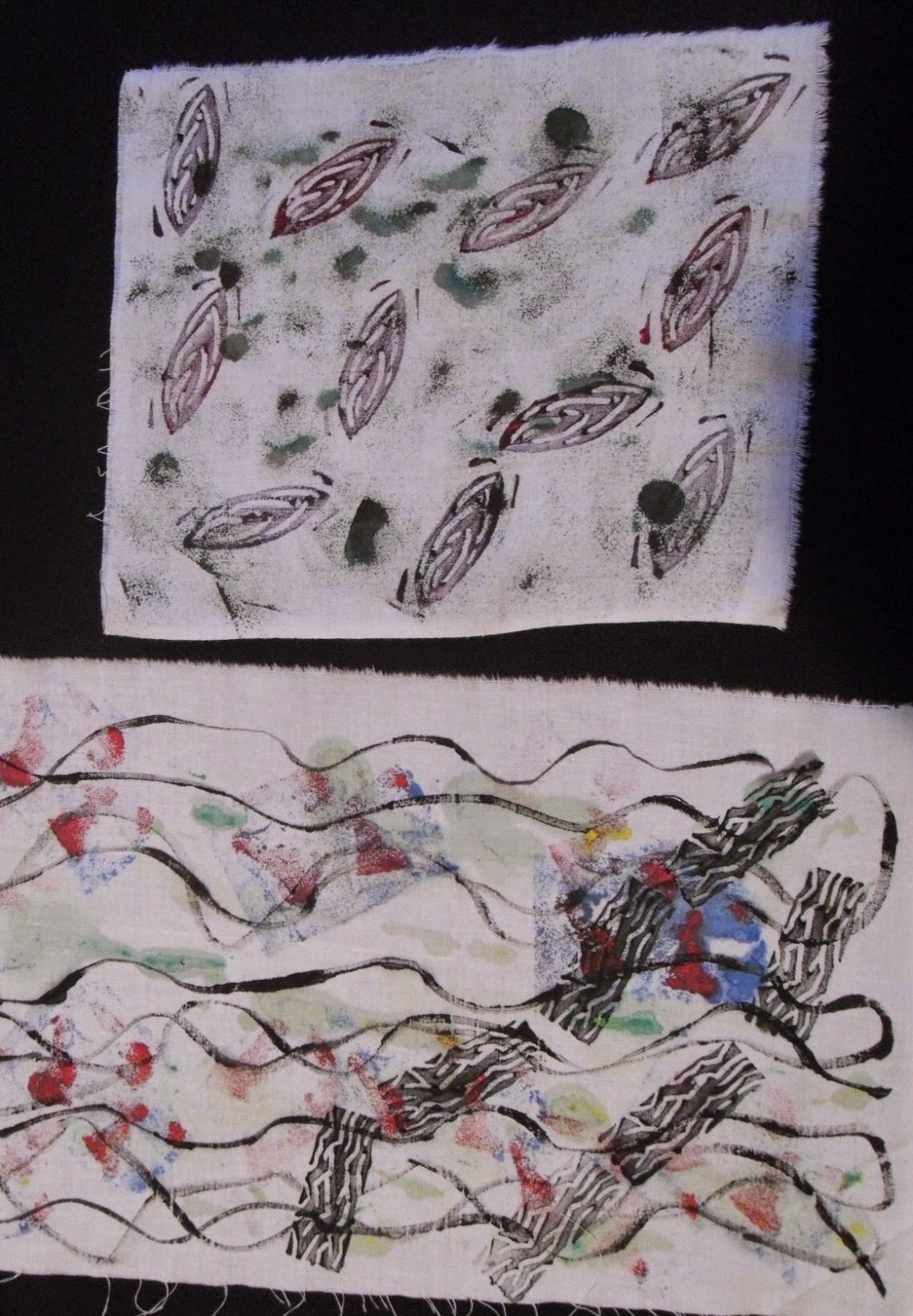 Some silk painting using swirls (I held the paint brush at the very far end and let the circles almost create themselves). I think this calligraphic effect is great, with thicker and thinner lines of dye. It reminds me a bit of those 1950s designs that used the hand painted effect in flower designs for fabrics. The colour here is not good in the photograph -  the red is in fact very rich and has a soft sheen to it (cut from a shirt).

At a later stage I had a go at silk painting using a water based gutta resist, with some effects created by adding salt to draw out the dye, and letting shades of dye merge. 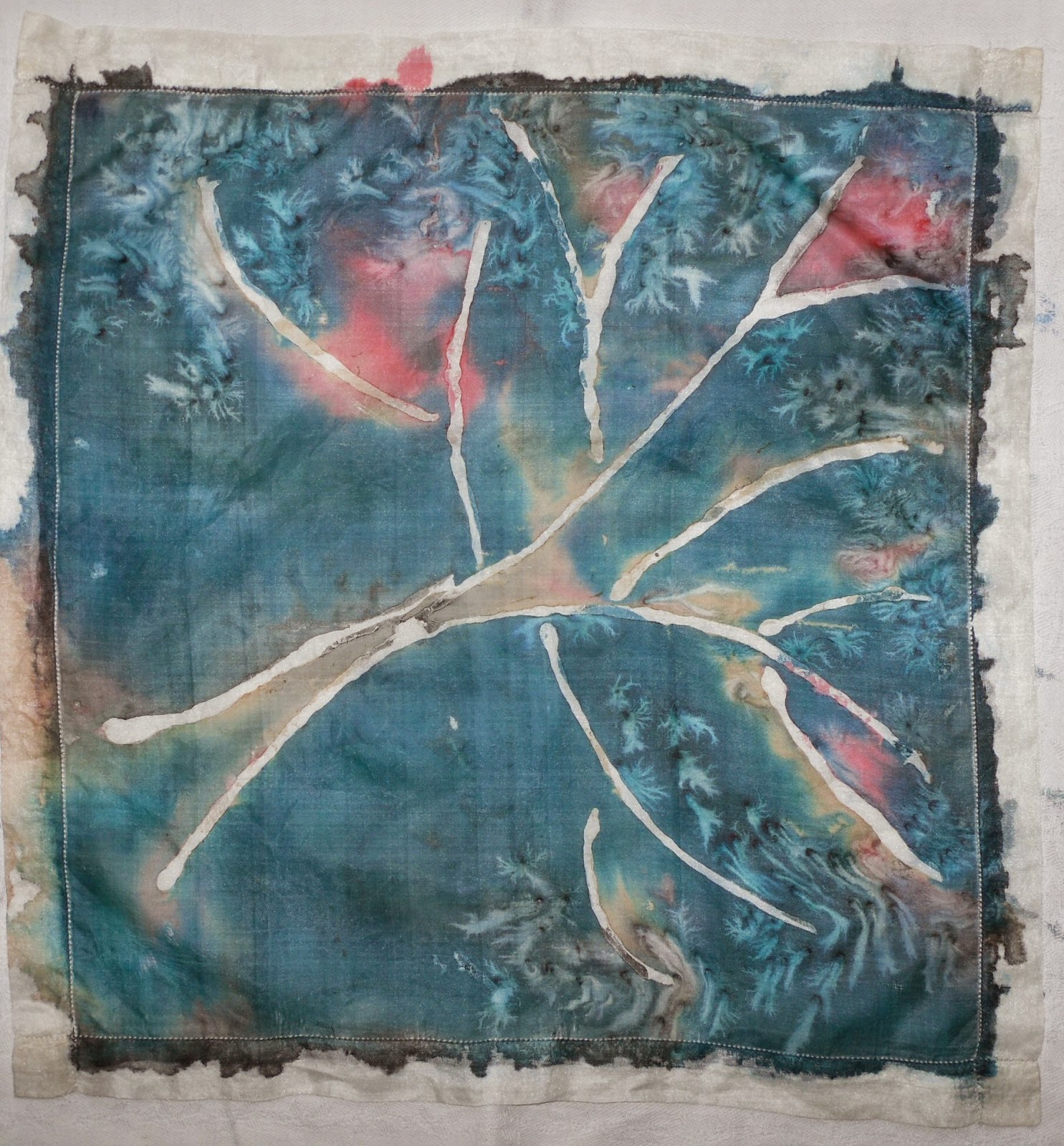 I used an old silk handkerchief for the sample and wanted the colours to merge where the tree outlines were kept open. I am not that fond of this type of silk painting, but it was interesting to try. Being water based the gutta let some of the dye slip through in places, and that might improve with practice, as would the control of the gutta so that widths and evenness would be better handled.
And then I re-discovered monoprinting! When I worked on the A level textiles I had bad experiences with monoprinting. No-one explained about consistency and spread of the paint properly, and I worked to make representational prints which failed miserably. On this wild printing day I just let rip, had a much better sense of the application of the paint and mixed colours. I think some of the result are very good - on the second day they were less so, and will need some work to be done to embellish and work with the marks in a different way.

Let's first get the failure out of the way: a sample printed on wove wool, obviously not good - wool is hairy and will not take the paint very well. The other sample was on a tie-dyed piece of old cotton, fine with the smooth surface, but the print and the jaggedy tie-dye background do not really cohere. 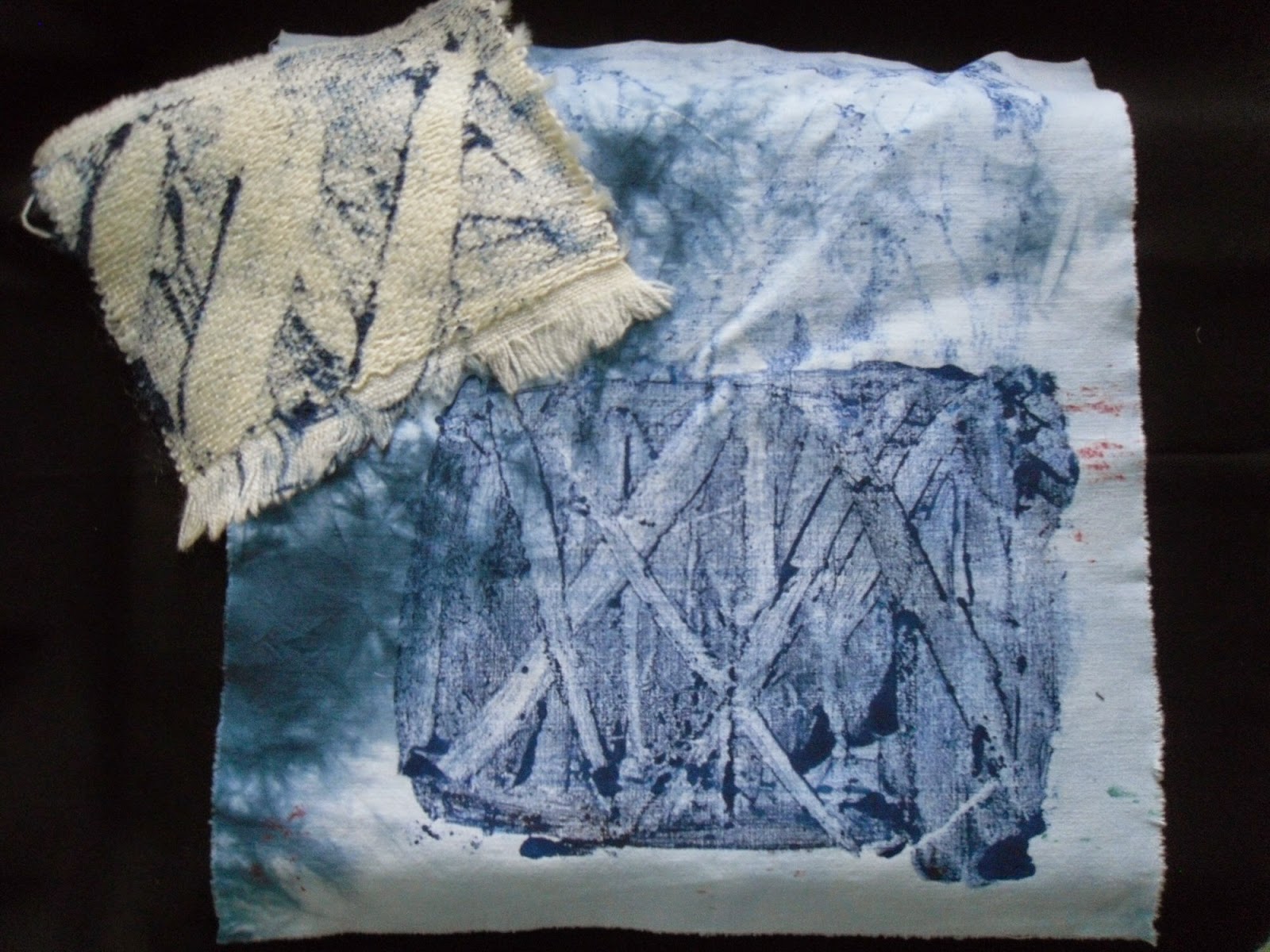 With monoprinting a smooth fabric is needed and I used mainly cottons but also tried thinner viscose and acetate. The acetate was quite effective, as the shiny, yet quite heavy fabric took the paint well and contrasted with the matt paint (second sample below). 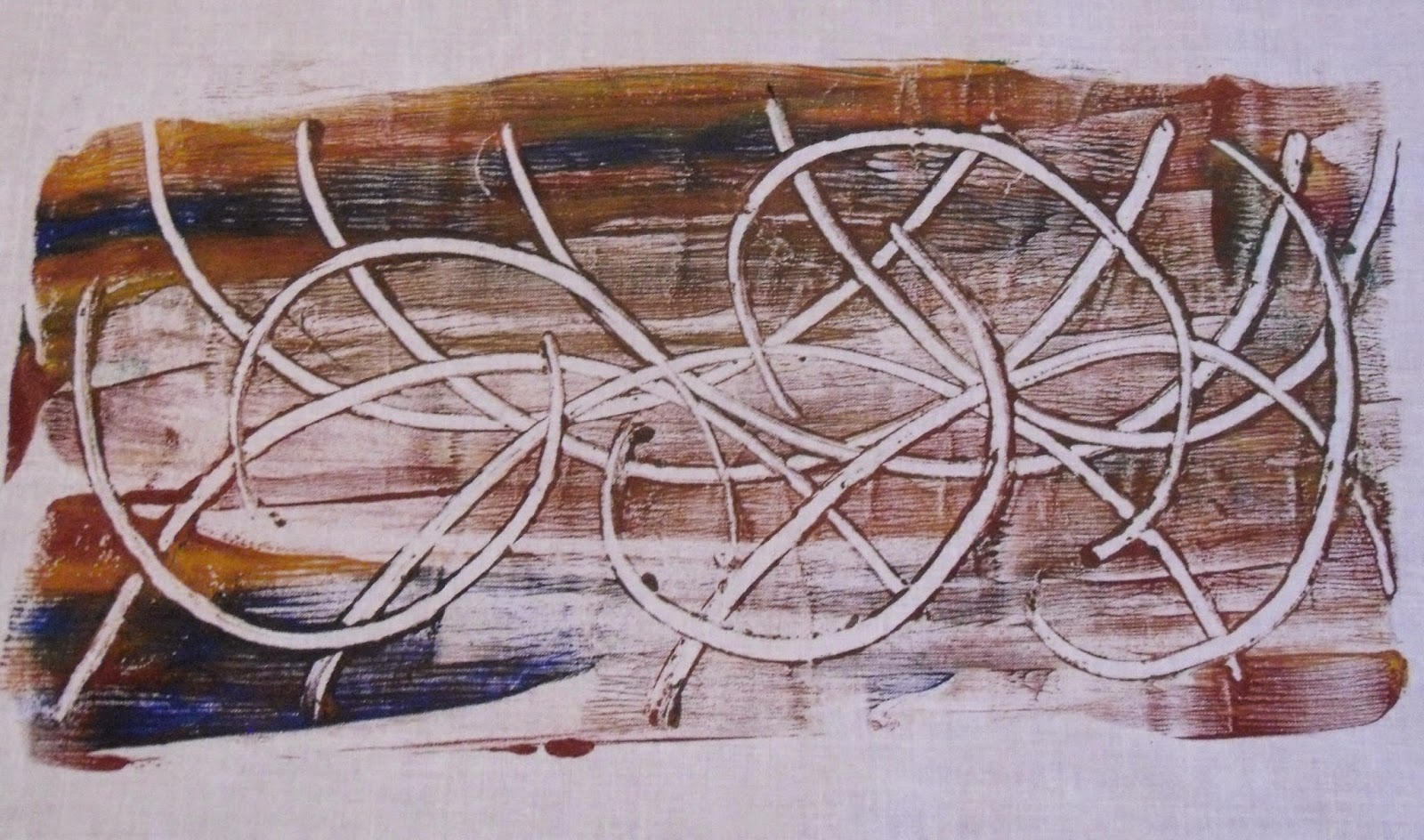 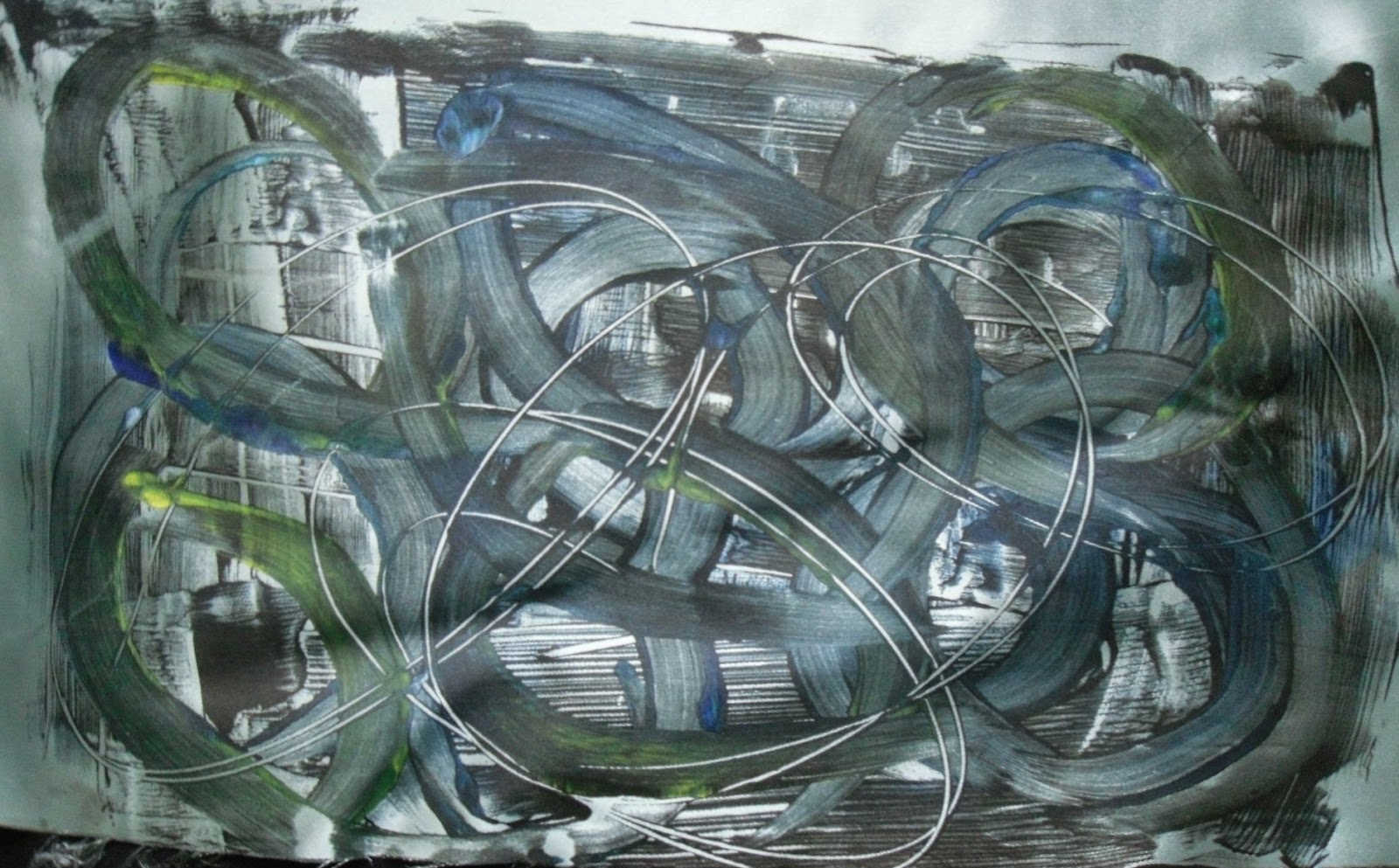 The direction of the paint, the depth of the scrapes into the paint affect the final design. I tried the looser liens I have come to enjoy making, but also had a go at slightly more controlled marks and concern about colour mixing: 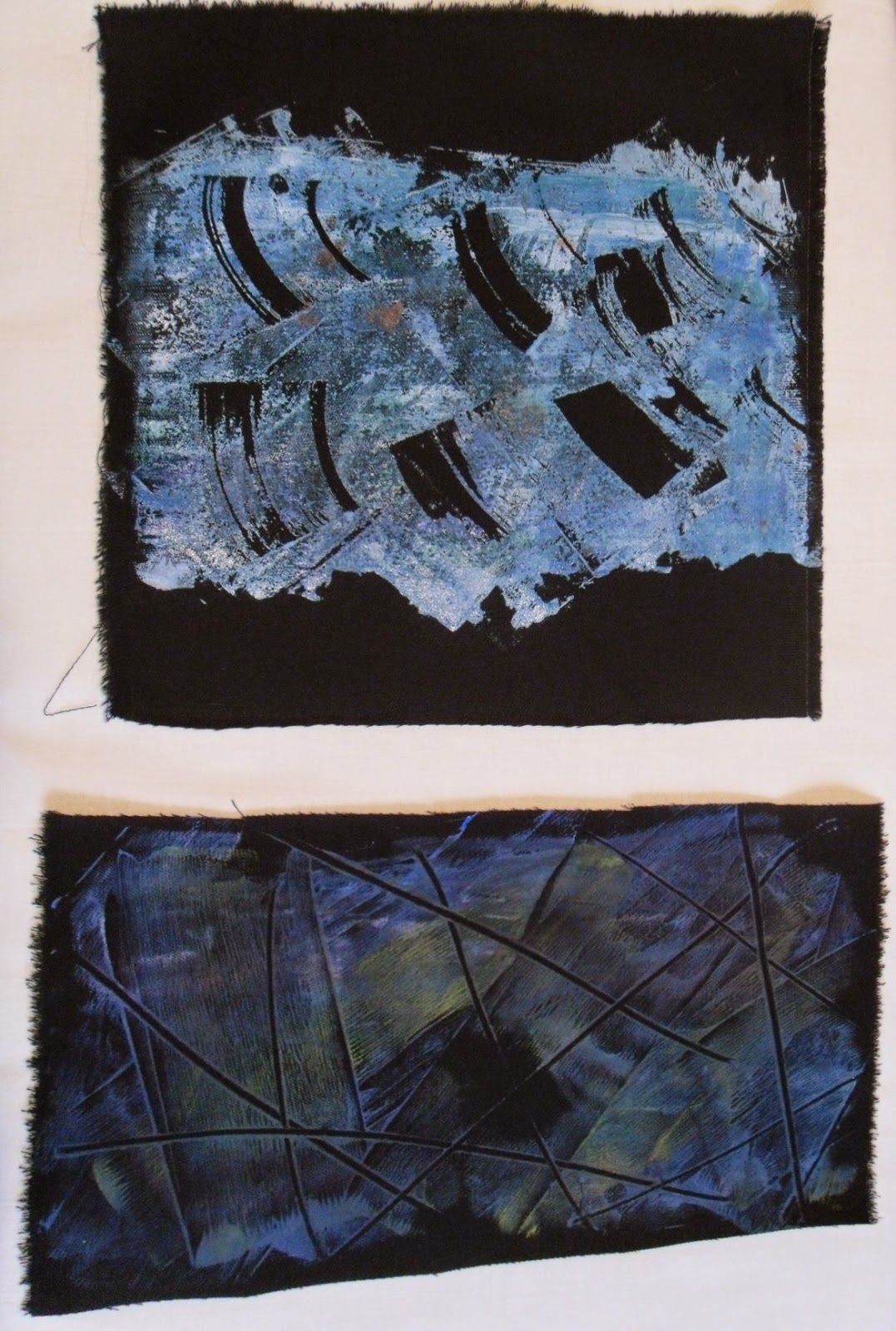 I really liked the top one here (green with a circle design) - in fact that was the first of the many, and as I said on the second day I must have wearied of the printing, which had been fairly high energy work the day before, and so the designs weakened. However the circles are quite good and stand well alone as a decorative piece - see a second version in black below.

The second piece was weaker in the print as it was a second or third impression, and I tried with a second impression of a new layer of paint onto the first at one end (left). 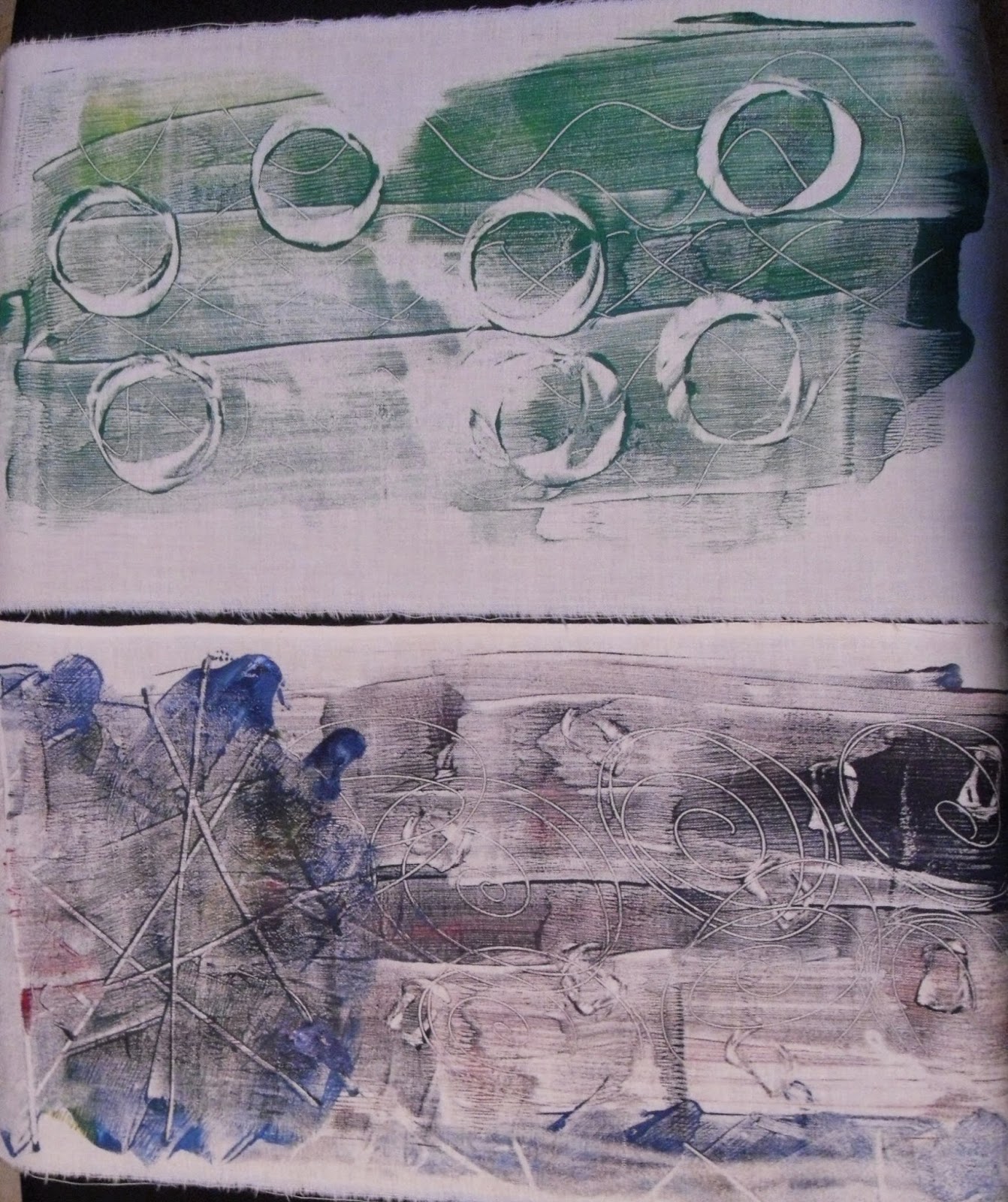 Here's the black version, I am quite pleased with this one. It is subtle, shows the colours and pattern and scraped lines in soft tones. 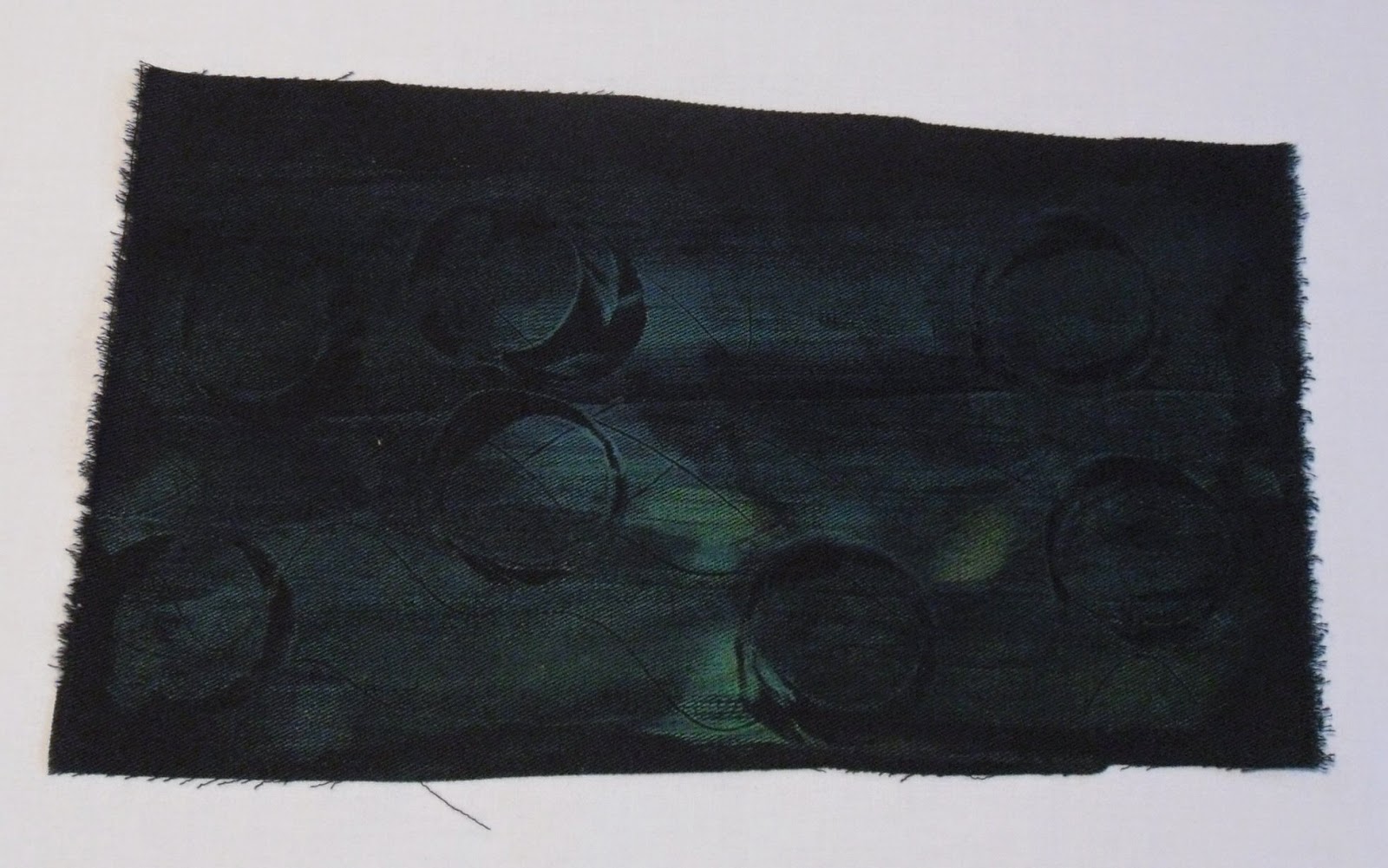 And this one also is quite effective, here I have scraped in a rhythmic pattern that suggests sails of some sort. It is quite loose but ordered somehow, and the direction of the paint in diagonal motion helps direct the lines of the scraped areas. 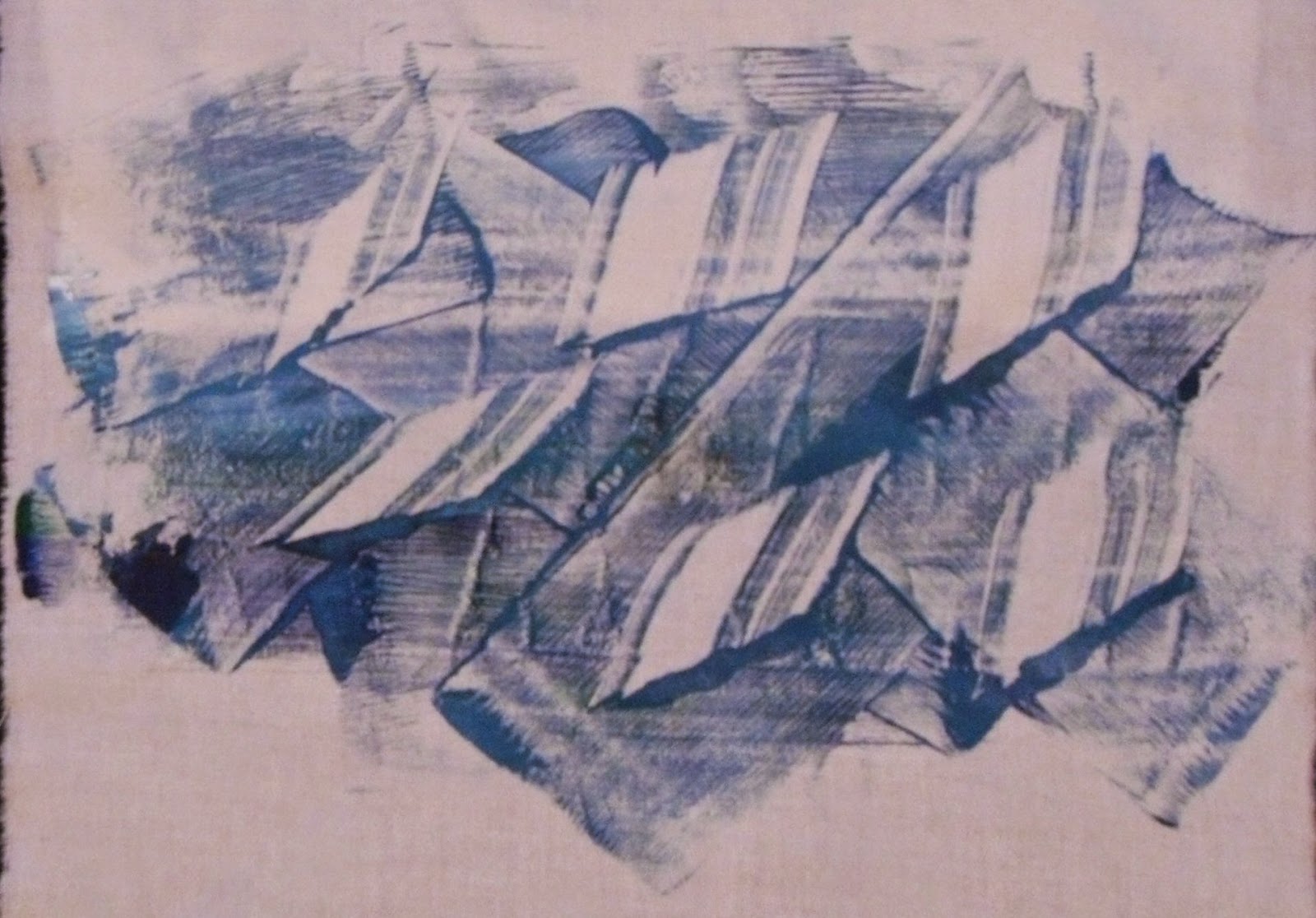 A very different technique is heat-set print on synthetic fabric. The dye is painted onto paper which is then ironed onto the fabric. I quite like the effect but I am still learning to assess how much dye to apply to the paper, and which fabrics may take the dye the best. For this assignment I applied some to a piece of acetate, which did not work well, probably because I was worried about the stuff melting under the heat of the iron, and I also used a large piece of synthetic satin style fabric (form the charity show so not sure what the fibre contents is). This worked fairly well. 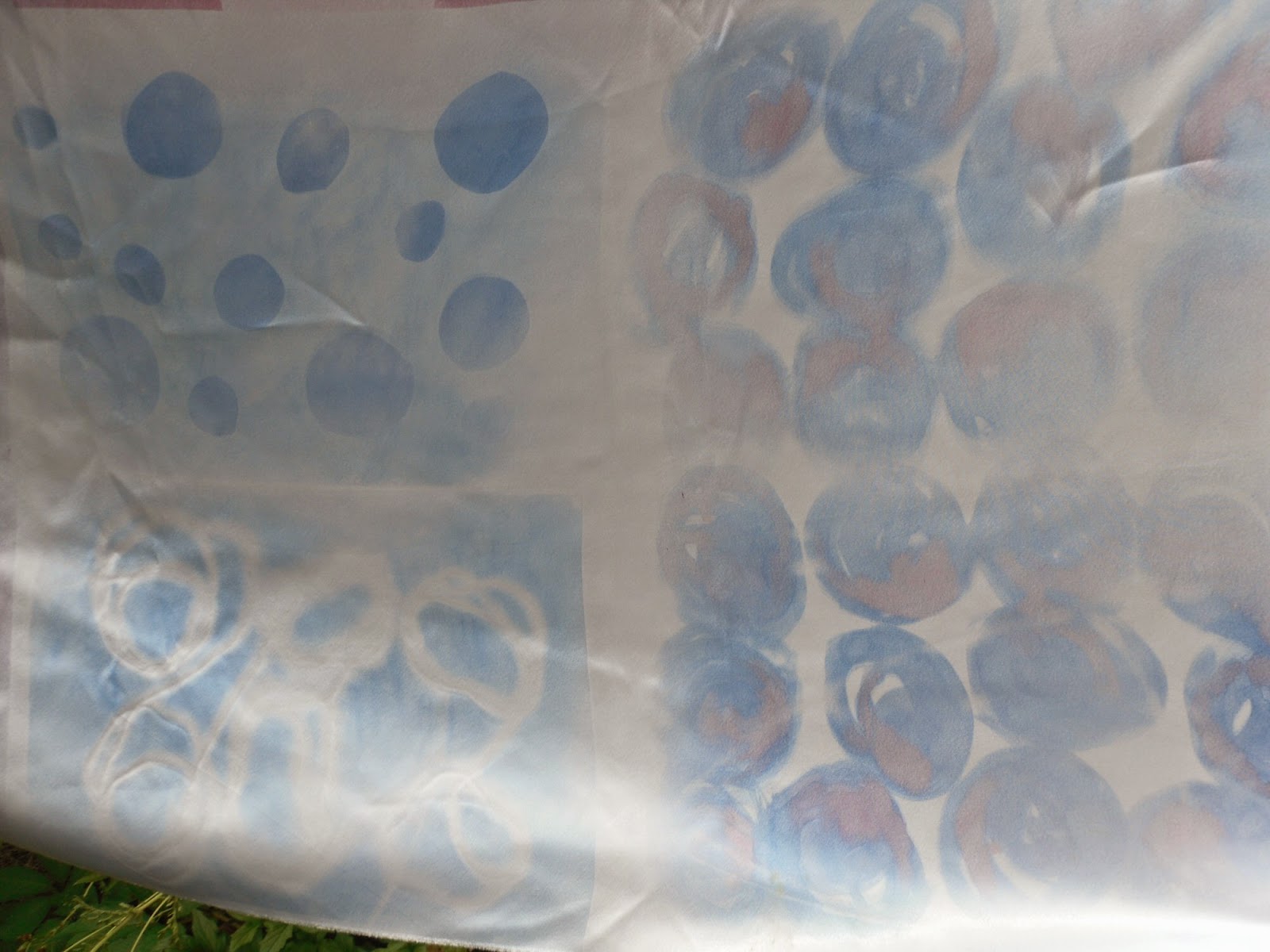 I am not sure whether the pattern is showing up well on the photograph - to the right are two sections of flower designs using blue and red dye. The bottom one was the first print, the one above, the second. What the second one shows is that firstly the dye is of course weaker in a re-used impression, but one also has to hold the paper still under the iron, otherwise the design moves and leaves shadow impressions.

To the right, below, is a print where I laid some string on the fabric and ironed over it with the blue. This could be used to interesting effect, perhaps over-printing with another colour, adding and removing resists. The top left section is a faint ghost impression of a block colour over which I placed cut out circular disks of dyed paper; again an effective method, where complex shapes could be applied, although too complex might be difficult to control when ironing.