Throughout December until now my work has mainly been on tapestry weaving. In a previous post I showed a work in progress where I wove on a wooden block and it has turned out to be a fairly respectable piece in two parts.

I should say that these blocks were quite hard to weave; I used a kebab stick as a shed tick and had to needle weave to complete the surface. When the work got to the top and the last rows had to the be woven I had to sometimes/often lift individual warps with a pointed implement to get the needle underneath - a very slow and laborious process.

The warp was linen and the weft was a varying mixture and blend of all manner of handspun and commercial yarn: wool, silk, paper, linen, angora, viscose, latex covered yarn and more. I used only natural and white for one block and white-greens for the other. The greens were mainly dyed using Dylon cold water dyes.

They were photographed in more of a studio setting and so the colours seem a bit more enhanced, but they work together and suggest plant shapes as I had planned: 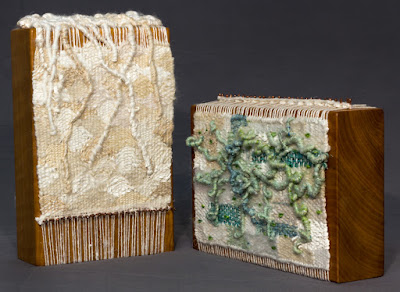 Here are some details of the different sides of it: 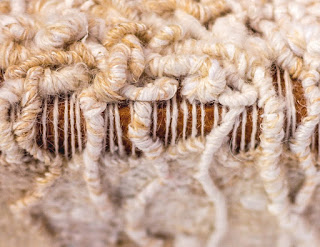 Basically I have wanted to work with interlaced wrapped elements for a while so this was opportunity to try this out, and as you can see the top of the white block was a mass of interwoven twisting elements. 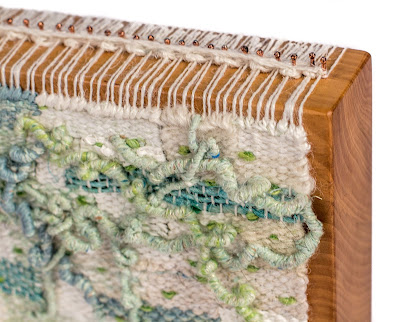 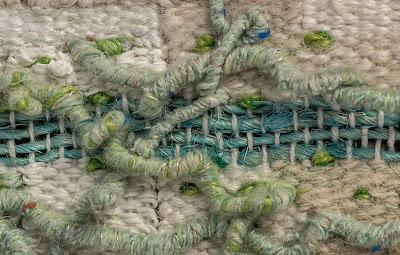 Another couple of detail images showing each side of the green-white block: Here I used some twisted wrapped elements but used more as features on the surface rather than as a mass, and on the other side I woven in a more graphic pattern partly inspired by Bauhaus type compositions, weaving it flat without any surface additions. 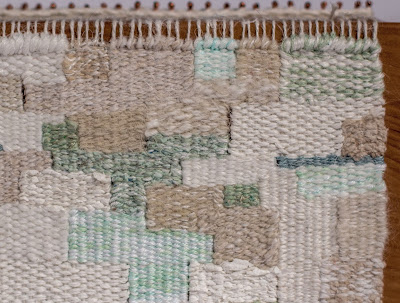 White texture
Over Christmas and into January I was working up a largish sample (26x54cm) in white tones using a mixture of handspun yarns, commercial natural and synthetic fibres. I had bought this raw silk which had a very interesting texture, quite stiff to the touch (although it went soft in handling during the weave) and I had wanted to wrap a number of warps to enable the yarn to be shown off properly.
I set out to create a sample that would be big enough to be a wall hung piece and would show off the different textures of mohair, paper yarn, rayon, wool, cotton and linen, and which would provide a neutral background to the raw silk.﻿

Here's the final tapestry, off the loom but quite finally mounted: 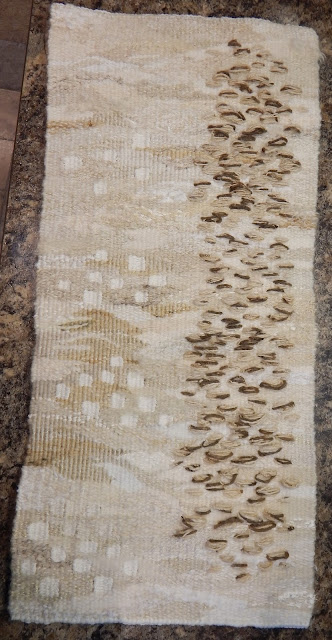 You can see that I built in some areas using small squares woven in paper yarn to make the background area a bit more interesting than eccentric weft only - the squares were pretty randomly placed and spanned either 3 or 4 warps.
Close up you can see how the texture on the right works - the raw silk lies in bunches over 3-5 warps: 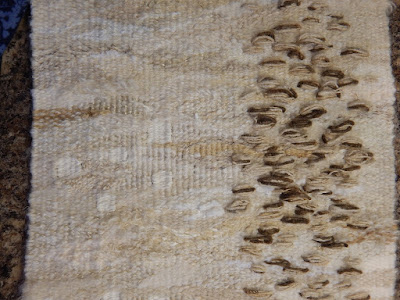 Looped mohair was also used and I think this needs to be used sparingly if used in this sort of work, or as features in large tapestries as it projects out from the surface and can be a bit too much of a contrast if the surface needs to be flat. In general I should mention that with so many different thicknesses and qualities of yarn I needed to keep an eye on how thick the weft became. Sometimes it probably got a bit too thick or thin, although overall the final piece feels fairly even. I think that you can use the density of weft to good effect in a textured tapestry and I want to explore this some more once I get onto my new loom (an old Dryad rug loom - more to follow soon). 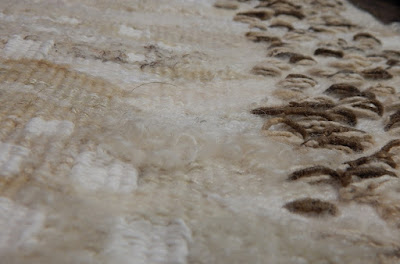 I am quite satisfied that the bunches of yarn around the warps worked as I had planned. I wonder whether you could wrap around even more warps and then use that effect in particular ways, but this would probably need a larger piece. As it is a couple of people have said that the  final effect feels like fungus on trees or perhaps more like the texture of birch bark, so I am happy that the organic feel of trees has been captured in this way.

I like the use of paper as a design detail in the squares, but see that I probably need to continue learning to control my edges as they tend to move in and out a bit depending on the thickness of the weft.