Well, what can one say other that when you hear that a major exhibition of Sheila Hicks' work is on show you have to go!

I just adore Hicks' work, and as fibre art seems to be having a bit of a revival she and other fibre artists are being shown - with Olga de Almaral being shown in Bruxelles and Annie Albers at the Tate Modern in the Autumn it is a good time to catch up on seeing the actual works that one otherwise just ends up looking at in books or one the web. So off I went to Paris for a night so that there would be one full day for the visit to the Pompidou Centre. I stayed in a small hotel near by, with tiny rooms and even smaller shower cubicles which you had to squeeze into.

Here's a view from my hotel room to the building opposite: 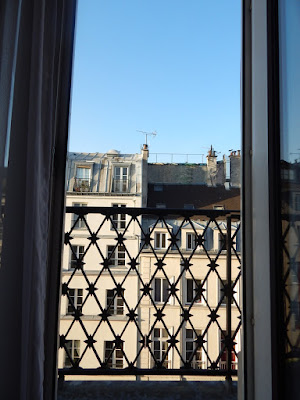 And as the very first thing to see at the Pompidou Centre was of course the Hicks' exhibition, Lifelines - I took lots of photographs but do not want to infringe copyright so will not include any here. But I can tell you that it was quite a spectacular show, with many large scale works and a lot of her minimes, the small weavings she weaves on a small mobile loom - these spanned her whole life of making, so there were weaving from 1958 or so and onwards. 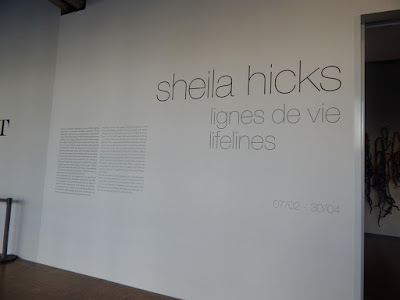 There was a lot of colour in this work - and it was quite a controlled use of colour, palettes led by main colour keys and lovely textures of woven, wrapped and untangled rope-like materials. There were a long series of films covering her more recent her career from the 1980s onwards. I spent a couple of hours in the gallery, watching all the films, studying the smaller works and wondering at the larger wrapped works.

I could spend a lot of time describing my exaltation at being at this exhibition. How wonderful to have been around at a time when the fibre arts movement was at its early beginnings as Hicks was, to be given the opportunities to travel, meet fascinating textile cultures in the South and Middle Americas, to experience encounters with architecture and sculpture, photography and yarn and synthesise all these impressions. Hicks' work was really ground breaking sitting alongside the other textile Modernists of the 1960s and -70s as the early voices of monumentally scaled work that related to space in particular ways.

In one film she discusses discovering the use of the repeatable textile module and using this in many different permutations. Various works were described in the films and impressions of her work methods. The exhibition was really a gift and something I will try to remember for a long time - and it gets even better: she was sitting nearby my table in the museum cafe, and I summoned up the courage to go and ask for her signature in the catalogue I had bought, and she kindly wrote a dedication in it! I am so thrilled that she was so generous and didn't seem to be bothered that someone quite excited came up to her like that.

The rest of the photos will show a few impressions from the Pompidou, starting with the grafitti in the women's loo, where people had written into the grouting between the times, which showed a but of inventiveness: 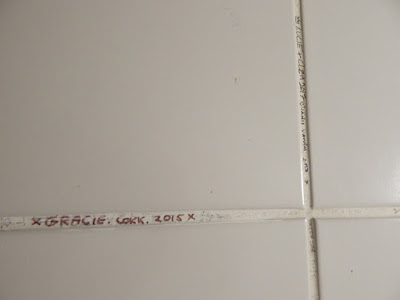 On the 5th floor there was a very nice outdoor gallery of sculpture or sculpture garden. The day was very hot so the water that was the reflective base for the sculpture was a cooling relief. 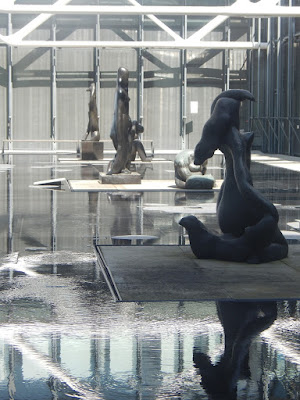 And a pigeon also found the water useful, he landed just in front on me and drank plenty, creating his own small figure in the water. 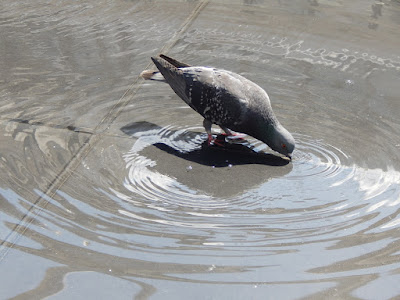 The building reflected in the water 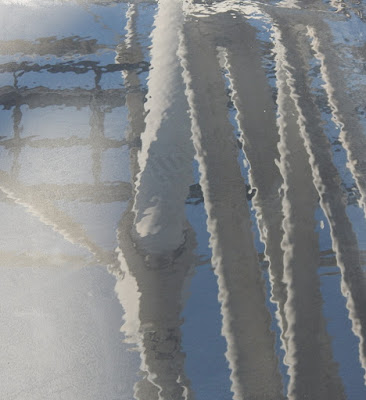