Although I am working on various things in the studio, I am currently veering towards tapestry weaving at the moment. It has been the main occupation of mine this winter, partly because I decided to submit something for an exhibition and partly because I just enjoy working in this way.

Tapestry weaving is tremendously stimulating, whether you spend a great deal of time designing or whether you think about the process as you build up the work through weaving. In the autumn I  went on a short course led by Fiona Hutchison which was very good for running through various techniques and introducing ways of thinking about tapestry weaving from a process perspective.

During that weekend I made two samples. One was an assembly of smaller elements each introducing a technique. A very useful way to explore colour and the way various yarns and fibre work together: 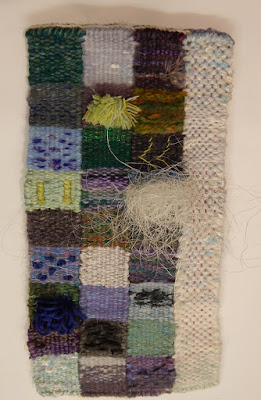 The warp was a multi-coloured cotton crepe, quite thin, so that I had to consider how dense to make the weft. I should say here that I am not a purist in terms of weft threads. It could be said that tapestry weaving needs to be woven using a smooth worsted wool or mohair (or some other non-elastic and tightly spun yarn) or perhaps a nettle yarn, and then only use these fibres throughout to gain a uniform work. I think this is an approach following in the tradition of gobelin weaving, however I feel closer to the experimentalists of recent decades who tested scale, texture and process.
So, I am less concerned about the purity of the weft: whether using weaving or knitting wool, synthetic novelty yarns, metallic or lurex or different types of braiding yarns, they can all contribute something to the texture of the weaving, and affect the way the light is reflected from the structure. I once found work by a Baltic tapestry weaver on the Web who was equally liberal in her use of different weft yarns and she made very large-scale works that looked quite spectacular. Using various different yarns in the weft does present its own problems: you have to look at how thick the different combinations of yarn work together, and I learnt on the course that hand-spun yarns may require more packing (probably because they can be loosely spun, but that depends on the original purpose of the yarn). Basically it would be difficult to achieve a smooth even surface with mixed fibre wefts. I usually combine knitting yarn with firmer yarns, linen, cotton and denser wools and this works OK. I am also exploring  the possibilities of showing warp in the weave. This is something Scandinavian weavers do well, and if work was done on a very large scale the warp could potentially become a dimension of the final fabric object.
The second sample was using a single technique I had wanted to try for some time:
﻿ 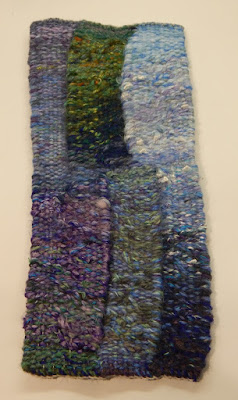 This is a way of creating texture building up sections that project over each other. I really liked this and can see some good potential for future works.
The sample was quite robust. Weaving loosely would not work in this case as you need to build up the weft to force the warps to space out. So I wove this using fairly thick weft elements and that feels quite good too, as in this case I could work out colour mixes along the way.
﻿Over the Christmas holiday
I mentioned that I have been working on something that would be submitted to be assessed for an exhibition. This work was something I worked on most of the holiday this winter and I have now submitted it. I can provide a brief glimpse of it here, and will add pictures of the final thing once I know whether it has been accepted: 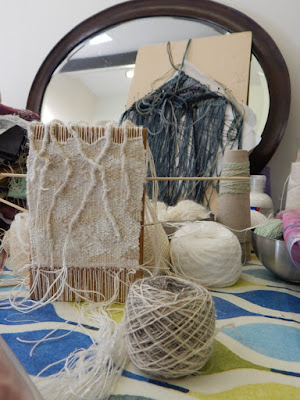 The wooden block with the weaving is one of two pieces that together make a 3D work I have called Crab Apple in Green and White. There is quite a lot of wrapping going on, and as my work concerns itself with nature and the notion of the organic there are suggestions of branches, twigs and growth. This has been quite a fun thing to work on as the format created constraints and I was able to work in a looser way with the weft to think about the way the relationship with how the warp sat on the blocks would work. Overall it was a satisfying work and I think the final dynamic between the blocks and the synthesis of the weavings is coherent.
Posted by LGoldsmithtextileart at 10:15