A day out to Chichester

We had a day out in Chichester recenty. I had been promoting this to my husband for some time now, as soon I will be travelling to near there quite a bit, so before the journey becomes commonplace, I thought it would be good to do it for pleasure. And there are antique shops there, which we both like visiting, Pallant House has interesting collections of fine art, and the cathedral has two large tapestries!

So off we went, and I can say that I was very pleased to have visited Pallant House. The exhibitions on at the time dealt with Walter Sickert's work in France (Walter Sickert in Dieppe) and another exhibition on the St Ives artists, on the theme of British Modernism. But there were also works on show from their regular display, and there was a very beautiful landscape by John Hubbard, and many other late 20th century artists that we do not normally seek out - it was a very good day.

We had lunch in the garden there, and the curators had placed sculptures there based on the outsider artist Nek Chand's garden sculptures, which was kind of nice, as they brought a bit of atmosphere to the relatively open dining area 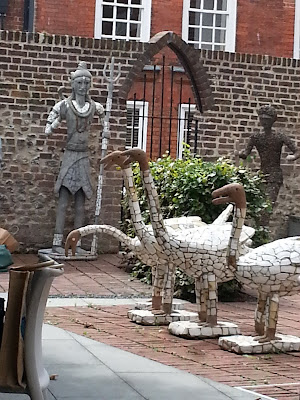 I got a lesson in how to take pictures with my husband's Galaxy, as I forgot to bring my camera (which bothered me all day - and you will see that the pictures in the cathedral suffered the consequences) - however we took a picture of my glass of water and milk jug, which was quite a good small composition of a still life: 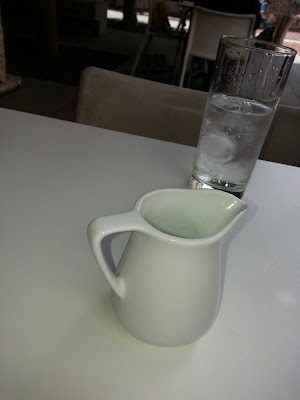 Overall I thought the St Ives paintings were a bit dull, although there were a few interesting sculptures, and some  occasionally interesting use of shapes and marks. I know that these artists were working to be visionary artists in the vein of the French modernists, but maybe it was just the ones on show, I did not feel particularly inspired looking at them. Of course the Hepworth sculpture was great, a wooden totem of a thing, vertical and very well placed beneath the stairwell so you could see from above and from floor level as well. And I was surprised that when there were a few interesting art items on show they didn't have a label, in one room was a Victorian chair with an opulent upholstered flowing extension drooping over the chair's side and onto the floor, but nothing in the room to tell you its title or its maker. There a glass artist's work (Michael Petry) on show as well, coiling coloured rods hung from the ceiling and various pieces showing poured glass (A Twist Time I believe it was entitled), with some smaller pieces amongst the silver collections in glass cases. I liked these small things, with clear glass having been poured over and into various silver vessels. They were totally unobtrusive amongst the historical objects and I noticed one couple didn't notice they were there (again no title, although these smaller pieces were probably part of his wider work).

We 'did' the antique shops, the bookshop in Pallant House and then lastly went for coffee and a good look around the cathedral. I did like the cathedral in Chichester. It had plenty of visitors, but did not feel busy in the way some of these places feel. I like it when great buildings become homes for new cultural expressions, and that these seem to fit so well into the fabric of the place, which was the case here.

When we go to visit large churches it is usually the windows, the font and the architecture that usually impress the most, and at Chichester there was a fine window by Chagall to admire: 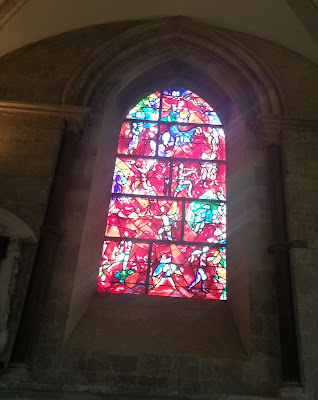 In churches there are also the soft furnishings to think about often embroidered altar frontals, and kneelers, and I was very impressed by the latter here - they were beautiful crewel-worked works showing abstracted angels on a green background, the designs of them was very good: 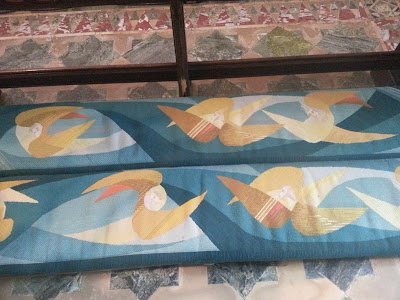 And there were smaller kneelers for chairs: 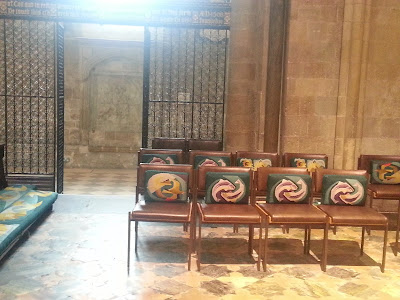 I think there may have been some sort of planned event coming up that evening as a bunch of people were milling about in the choir, and I took a very blurred picture of a woman that I think works quite well as an abstraction (this was due to the camera in the Galaxy) - with her dark shape gently flowing amongst the lights: 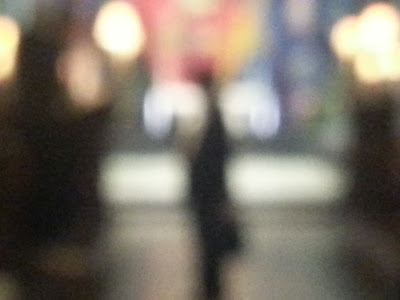 The colours in the background are from the John Piper tapestry that hangs behind the altar: 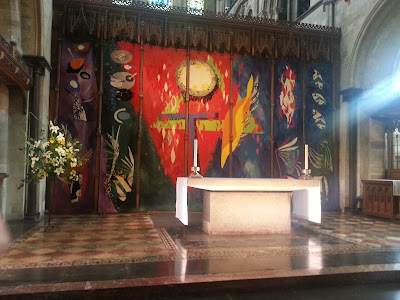 This was the only reasonable picture of the Piper tapestry - every other one was in some way out of focus. Hanging behind the screen is another tapestry by Ursula Benker-Schirmer, a German tapestry weaver who learned her craft in post-war France. 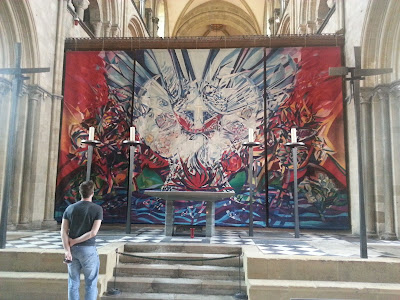 It must be a gift to get a commission from a large organisation to enable you to work so fully on your own work, or direct it in some way. Tapestry really lends itself to large scale works, and I using these string colours the works stand as almost jewel-like wall hangings against the stoney architecture. 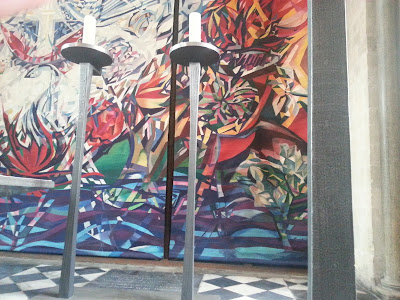 ....and finally a detail to show how she managed to design a tree or two into here design, which otherwise is dedicated to St Richard, and in German is called the Versöhnungsgobelin (the reconciliation tapestry, or as it is described on a label, the Anglo-German tapestry). You can also see here some fine candlesticks, and in general the cathedral seems to support contemporary art and crafts work.
Posted by LGoldsmithtextileart at 13:54