For this exercise I thought long and hard about what to select. I collect domestic embroidery (mainly from the 1950s and ‘60s because that is what is available and affordable), but have also dabbled in collecting vintage dresses, and have a few Miao textiles. There seems to be a leaning in this section to think about evocative textiles, something that might give rise to certain feelings or thoughts, memories or personal experiences. Among the many, many pieces of domestic embroidery in my collection, I in the end chose a couple of embroidered runners from Denmark that were interesting for a number of reasons. They use stitch and colour in interesting ways, reflecting their respective times, but their design being, to different extents, unusual in comparison with the majority of work from their era. So, rather than reacting emotionally to them, I am studying them as part of a historical tradition, but maybe reflecting something a little unique.
Origins

I can’t exactly remember when I got them. I am a hoarder and collector and will go to any charity shop I come across, when sometimes a fantastic thing will call out to be included in the collection – I would have bought them on a trip to Denmark, somewhere in a charity shop in the middle of Jutland. Collecting is a strange phenomenon, a way of filling some sort of void it feels like sometimes. At other times it seems to open up possibilities, you find things you ‘might need’ for some future project, but maybe it is also some sort of displacement activity for the real thing – that thing that should be thought about and made, rather than thought about and bought for and never quite made.


The runners
The first runner is   long and    wide. It is embroidered cotton thread on a linen base fabric, that would once have been a bright yellowy-green, but it has faded a bit now. It is likely to be from the 1950s I am guessing. 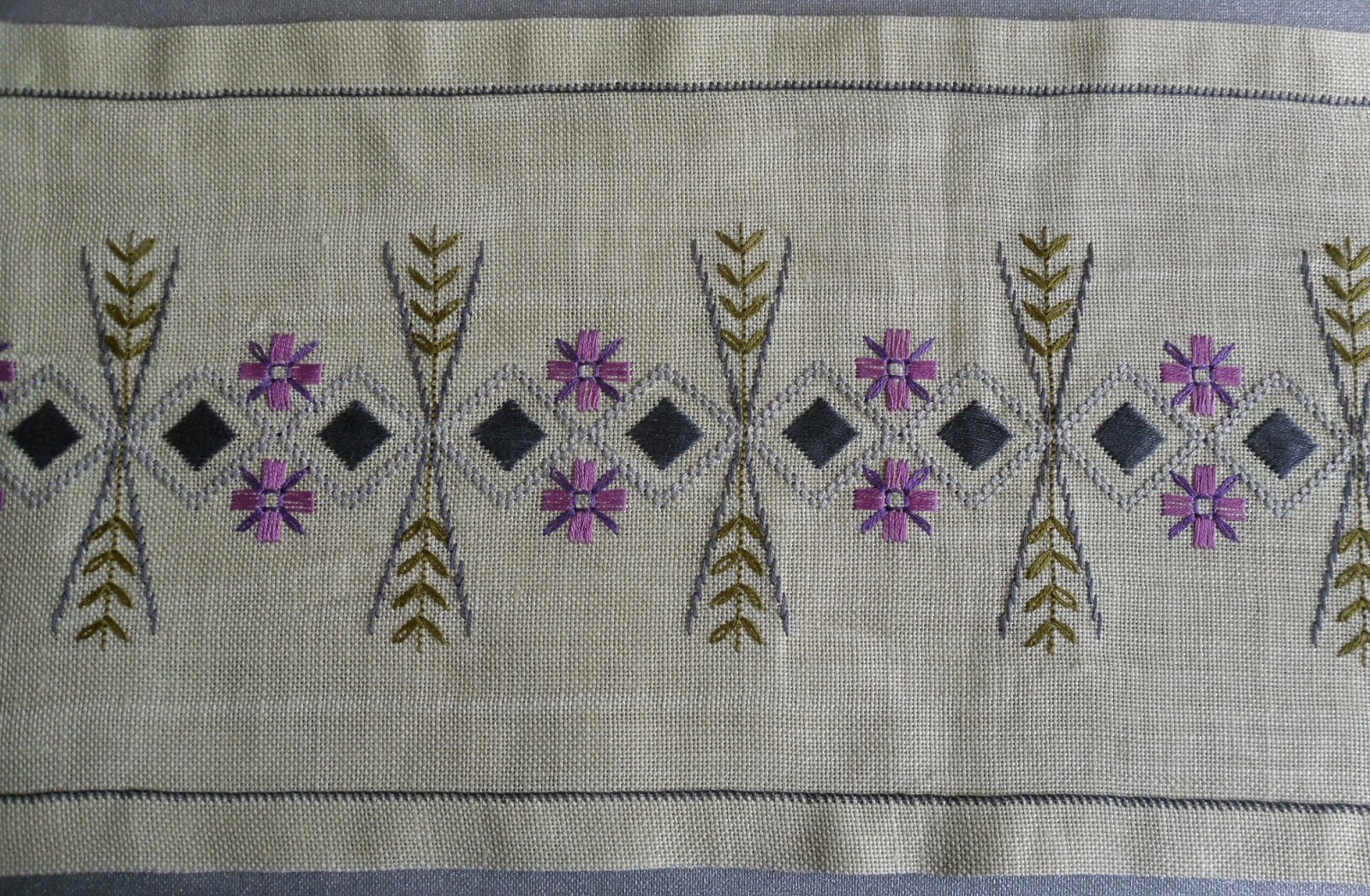 The embroidery is a hand embroidered simple geometric repeat. A running line of square motifs embroidered in grey satin stitch, with a white border is cut through at each intersection by alternating pink square ‘flowers’ and green ‘ears of corn’ held in place by open funnels. There are just a few different stitches used: single chain, satin.... The hem of the runner is sewn down with a button hole stitch in grey. The base fabric is fine linen which allows for counted embroidery. Together with the geometry of the design the whole is balanced, borders are not too wide, nor is any coloured part of the design too strong against other colours. From the less faded back that shows up the colours as they might have been it suggests itself to have been a striking thing. It is also a prime example of the rigorous precision stitching that rendered the back almost as finely sewn as the front. 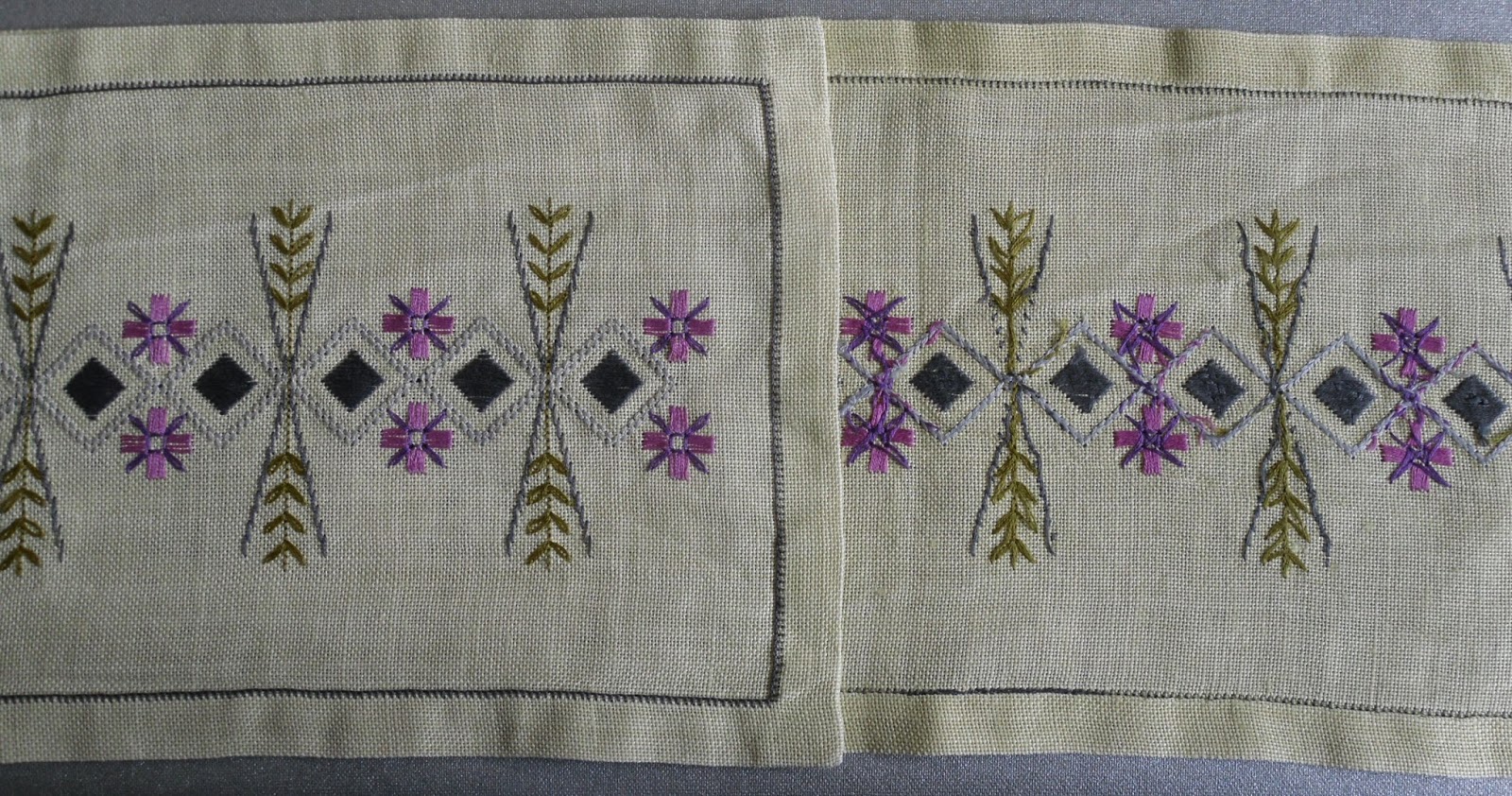 It is likely to have been made by a woman, to decorate a room, most likely to be laid on a coffee or dining table. In Denmark when you had guests during the middle decades of the 20th century you would lay out the best linen, usually large white table cloths, so I am guessing that the runner would have been laid out when the table was not used for entertaining, but been visible in everyday life. There are no wax stains on it (sometimes you find that on this type of linen, dripped onto the linen if people had candle sticks and had not kept an eye on the melting wax).
The second runner would have had similar uses and would also have been made by a woman; in this case though, probably made 20 or 30 years later. Again the base fabric is linen, this time a clear white and the embroidery is counted. The motif is a repeat of a candle-like design. The candle is blue and above it sits a yellow flame with an orange centre; the proportions are a bit odd in this design, the 'candle' section is very short compared to the very large flame.

What is interesting about this design is the flame element. In my many travels to Danish charity shops and museums, in my mother’s collection of domestic embroidery from my grandmother’s time, and from visits to friends when I was growing up, I have never seen the inventive use of embroidery in this way – a lozenge shape made up mainly of open button hole stitch. I may be mistaken, but far the most of conventional Danish domestic embroidery was made in counted stitch, cross stitch, hardanger, or if going back to the earlier part of the 20th century, whitework satin stitch and various means of using pulled threads and open lacy stitch. Some moralising embroideries on domestic femininity and child and house rearing were also made, which were cartoon-like illustrations using a line stitch. Almost exclusively these embroideries were made by hand, using ready-made designs either sold commercially or printed in women’s or family coloured weeklies. It is likely that this candle design might be from a popular magazine, or was designed by someone at home, in its modest way its seems quite experimental compared to a traditional counted work. 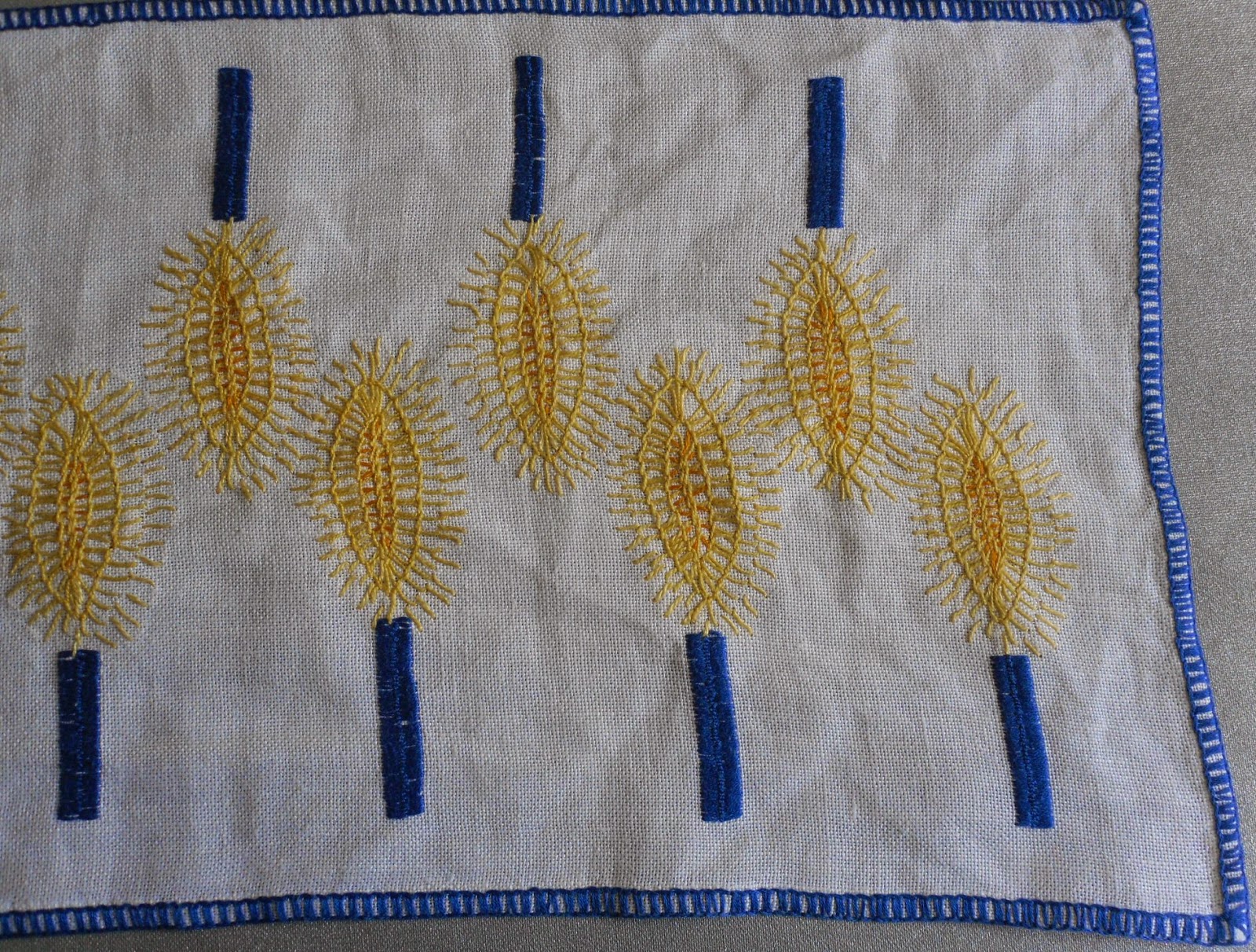 What do I like about them?
When considering the history of design the idea of ‘liking’ something is just the beginning. The idea of being drawn to something because it inspires, it evokes, it triggers questions, carries you beyond a preference for something. I could have chosen something else, I have a fantastic Danish arts and crafts embroidered tablecloth for example which I could have written about at length, indeed design historians in Denmark have written books about these exceptional things. But the fundamental reason why I collect domestic embroidery is I suppose, because, although the motifs are repeatedly about flowers (in the UK many a tray cloth is covered in sprays of lazy daisies), or hardanger geometry, or the ubiquitous cross stitch, the work is so easily forgotten and overlooked, and for me that does evoke something subjective. It is about women’s domestic role as keepers of a domestic idyll, making the home a place of beauty and calm. When I think about all this work done, so much energy spent throughout human history and now transformed by mass production and mass consumerism to other means of expression, I feel each individual effort from history just fades into a single pinprick.


The archaeology of the domestic is almost palpable in charity shops at times. On the other hand it also becomes absorbed into consumerism under the banner of ‘vintage’. I feel ambivalent about this – this label that subsumes the recent history into another fashion statement, however that is another discussion.
That woman who worked to make something ‘nice’ and ‘pretty’ for the home may have gone, but her work is still here. And now, indeed in the last 40 years or so, in the world of domestic making, the table cloths and doilies have been superseded by creative embroidery and this thing called ‘craft’ and the hand-made, that still plays a role in women’s lives. But a displacement seems to have happened that comes out of fashions in domestic interiors and cultural patterns of entertaining, but also linked strongly to the change in women’s roles, as workers outside the home as well as in it. There is less time and taste now for runners and table cloths, the interest has turned to tapestry kits of designer-led designs for cushions, paper crafts and creative self-expression.


All those doilies and cloths embroidered in and for the home, in the 20th century especially after the world wars, tell us something about the way the culture of the home functioned, or did not function. Sometimes I find pristine and perfect embroidered table cloths, elaborate projects that would have taken a long time to make, that were barely, if ever used. I get quite excited for a while when I see perfect colours and a print design still intact beneath the work. But it is also a bit sad that something was missed, the cloth and all that work were barely seen and admired, and that woman’s work went into a bottom drawer or box. What does it mean, what happened for this cloth never to be shown to friends and family?
Of course that was not the fate of my runner chosen here. I think it was shown off and was on display for quite a while. It was probably dropped into the charity shop as an elderly person down-sized or died, their relatives having different tastes and making different life choices. In my keep the runners now lie together with table and tray cloths, pyjama pockets and tea cosies waiting for something to happen. I used several items in a small exhibition a few years ago and now for a rare moment it also joins the visual life of the Internet.
Posted by LGoldsmithtextileart at 10:01